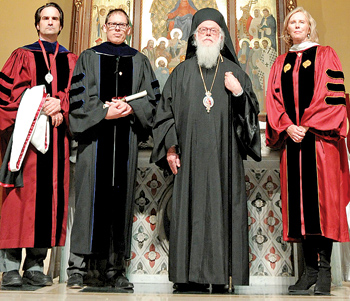 From left to right, Aristotle Papanikolaou, Archbishop Demetrios Chair in Orthodox Theology and Culture; George Demacopoulos, professor of historical theology; His Beatitude, Anastasios, Archbishop of Tirana, Durres, and All Albania; and Nora Ahern Grose, secretary of the Fordham University Board of Trustees. Grose joined Father McShane to present an honorary degree to the Archbishop, pictured below.

On Jan. 28, Fordham University honored a spiritual leader who was pivotal in dispelling the “absolute religious darkness” imposed on the people of Albania by a communist dictatorship.

The University conferred a doctorate of humane letters, honoris causa, on His Beatitude, Anastasios, Archbishop of Tirana, Durrës, and All Albania, who has worked tirelessly to rebuild the Orthodox Church of Albania for more than 20 years.

“Fordham is honored this night beyond words to welcome you into its family,” said Joseph M. McShane, S.J., president of Fordham, speaking at the University Church, where the ceremony was held. “Throughout your life, you have sought to bring new grace and blessed light to a struggling church. And you have brought the peace of the assurances that the resurrection brings to all of the members of the flock to whom you have ministered, and to whom you have ministered with holy constancy, great compassion, and remarkable effectiveness.”

Archbishop Anastasios delivered the annual Orthodoxy in America Lecture, describing the work of restoring the church. He was elected archbishop in 1992, just two years after the collapse of a government that, for decades, had outlawed all religious expression. Shrines had been abolished and churches had been either destroyed or converted for other uses. 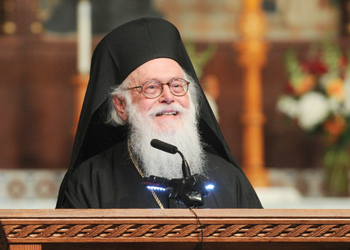 Anastasios recalled standing in one of these buildings—a ruined cathedral—in 1991 with a group of “elderly and tormented” people who were moved to tears by the simple act of lighting candles and responding to his chants of “Christ is risen” with “Truly he is risen.”

“Since then, ‘Christ is risen’ became the motto with which we have carried on (during) all these years of difficulties and problems,” he said.

Given the formidable obstacles to rebuilding the church, he hesitated to accept the position of archbishop, but agreed to do so because of one conviction—“that the most crucial issue at that historical moment was obedience to the will of God and not any success in itself.”

Since then he has led efforts to repair 160 churches, build another 150, establish approximately 460 parishes, and train clergy, more than 150 of whom have been ordained. Other church efforts included translating Christian literature into Albanian and supporting health care, education, social welfare, and rural development.

The church has also strived for harmony with Albania’s other Christians and with Muslims, who constitute the country’s majority.

“Christians and Muslims agreed that, in a modern free society, we must articulate and cultivate moral values of common concern. Among all, and above all, we must develop the conviction that humanity is not independent in the universe and that the individual interests, as well as the worship of money, pleasure, and power cannot be the new idols, the only criteria for contemporary society.”

He concluded with a comparison between the light of Christ and light as studied by scientists: “What at first glance appears white in the phenomenon of light is actually a synthesis of various colors. And the light of Christ, which we are called to transmit, may be analyzed in various ways and colorations in life.”

One of those colors, he said, is “the light of love, with the meaning and the power given by Christian faith and the living example of all those who have experienced it—something that no other social institution can ever replace.”

The Orthodoxy in America Lecture series, the largest annual lecture of its kind, is sponsored by the Orthodox Christian Studies Center.