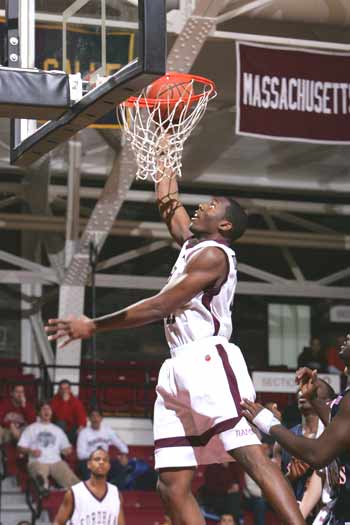 Fordham senior forward Bryant Dunston was named first team NABC All-Region 2 by a vote of the region’s coaches. Dunston is now eligible for the State Farm Division I All-America teams to be announced April 5 at the 2008 NABC Convention in San Antonio.

On the year, Dunston leads the Rams in scoring and rebounding, averaging 15.8 points and 10 rebounds per game. He also leads the Atlantic 10 in rebounding and is ranked second in blocks (2.8 blocks per game) and field goal percentage (.526).

Over his career, Dunston has scored 1,794 points and grabbed 970 boards. He is second on Fordham’s all-time scoring list, fourth on the all-time rebounding list and the career leader in blocked shots with 288.

On the women’s side, the Atlantic 10 coaches honored freshman guard Megan Mahoney by naming her to the conference’s 2008 All-Rookie Team. She is the first member of the Fordham women’s basketball team to receive that distinction.

In other winter action, the men’s track squad had two individuals and one relay team earn All-Atlantic 10 honors while an individual on the women’s team earned All-Conference accolades.

The men’s 4×800 relay of Ryan Serkes, Clifton Hilario, Tom Finnerty and Matt Lowenthal, which already had qualified for the IC4A Championship in March, won the event and defended their Atlantic 10 title in a season-best time of 7:50.67.

In addition to the 4×800 relay, Lowenthal and DiBuono placed second in their respective events, earning Second Team All-Atlantic 10 honors. Lowenthal was second in the 1,000 meters in 2:29.58, while DiBuono was second in the weight throw with a toss of 57 feet 1 inch. DiBuono also scored for Fordham in the shot put, placing sixth.

On the women’s side, senior Melissa Salerno earned Second Team All-Atlantic 10 honors in the 1,000 meters, placing second in a time of 2:56.38. She also qualified earlier this winter for the ECAC Championship in the event.