skip to main content
Return to Fordham University
You are at:Home»Inside Fordham»Fordham Athletes Deliver a December to Remember

Years from now, when the story of Fordham’s basketball ascendance is told, the Rams’ stunning victory on Dec. 11 over the St. John’s Red Storm will highlight the first chapter.

Down by 21 points with 16:12 left to play, senior guard Brenton Butler hit a three-pointer that triggered the Rams’ furious comeback. When the final buzzer sounded, Fordham had outlasted the Red Storm 84-81 on the strength of two 16-0 runs. 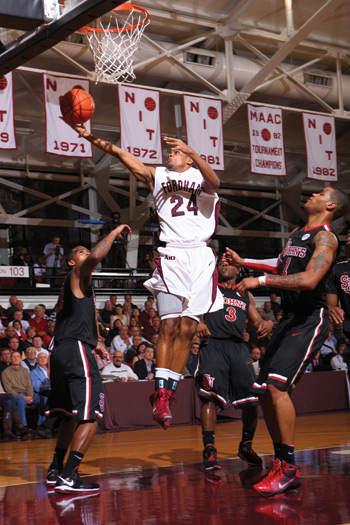 Senior guard Brenton Butler takes it to the hoop against St. John’s on Dec. 11.

Howls echoed through the Rose Hill Gym, sending many in the sold-out arena spilling onto the court to celebrate with the team.

Though the victory was historic, it was just one highlight in a weekend filled with Fordham athletic dominance across several sports.

Seven hours after the Rams sent the Red Storm packing, a familiar Fordham face was making his name known in the annals of professional football.

Former Rams quarterback John Skelton (GSB ’10), who was drafted by the Arizona Cardinals last spring, made his first NFL start on Dec. 12, leading his team to a 43-13 pasting of the Denver Broncos.

The Cardinals, which had lost seven straight games before Skelton took over, won by their largest margin of victory since 1993. With the Fordham graduate at the helm, the Cardinals achieved a 2-2 record over their last four games.

Skelton, who was used mainly to lead the scout team before starting the Denver game, displayed a level of poise in the pocket that belied his inexperience. He received several favorable notices from the NFL press.

“‘Even-keeled’ is a phrase made for Skelton, and if the Cardinals learned anything Sunday, it was that Skelton would carry that personality into games,” wrote Darren Urban of NFL.com. “If anything, Skelton said, passing game coordinator Mike Miller tells him he doesn’t show enough emotion.”

He switched on HBO to watch the premiere of a documentary about Vince Lombardi, the Fordham football legend and Hall of Fame coach for the Green Bay Packers.

“The documentary is a fascinating refresher course in the story of a figure we think we know well but who has been dead for 40 years,” wrote Richard Sandomir in The New York Times.
The film, which was on near-constant rotation across HBO’s several stations, may be the perfect ending to what can arguably be called the best Fordham sports weekend in decades.

It bears noting, however, that December had been good to the University’s athletic teams even before the heroics of that weekend.

The month opened with a visit to Fordham by a live ram mascot. “Buster” met and posed with students on Dec. 1 courtesy of Mario Gabelli (GSB ’65), benefactor of the Gabelli School of Business. It had been years since a live ram trod the pathways of Rose Hill. 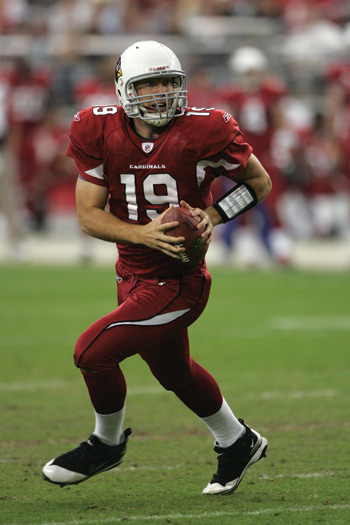 On Dec. 8, Fordham won the “Battle of the Bronx” when it shut down Manhattan 73-59 at the Rose Hill Gym. The win provided a hint of what was to come against St. John’s. After defeating both teams, Fordham can now lay claim to being the king of collegiate basketball in New York. The team’s winning streak continued on Dec. 22 when it bested Kennesaw State.

At the Christmas Classic indoor track meet, which was held on Dec. 10 at the Lombardi Memorial Center, the Fordham women had three event winners while the men’s team won the weight throw, high jump and 500-meter competition.

The women’s basketball team also showed some spark, opening the month with two straight victories and closing it with a win against Yale on Dec. 29.