skip to main content
Return to Fordham University
You are at:Home»Inside Fordham»Fordham at Work: Tim Zay 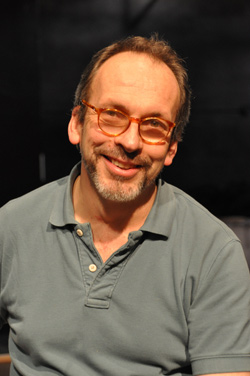 WHO HE IS
Technical Director, Fordham Theatre Program, and adjunct instructor in the Department of Theatre and Visual Arts

WHAT HE DOES
Tim is in charge of set-building and other technical aspects for the Fordham Mainstage theatre. He has worked on 44 main stage productions. As an adjunct, he teaches theatre students a lab section in set collaboration and a full course in stage combat. For each show, he works from the set designer’s plans to devise a structural setup for the design and choose materials. He then oversees its construction by a team consisting of one professional carpenter and a group of theatre students. In the production of Hamlet (April 22 through May 1), his chief challenge was building a 32-foot-long ceiling that could be raised and lowered.

BACKGROUND
After earning degrees in psychology and theatre from the University of Cincinnati, Tim did improvisation with Cleveland’s Bread & Circuses theatre. He helped co-found the Aspen Playwrights Festival. Before settling in New York and developing his skills in stage carpentry, Tim performed around Europe, including doing Sophocles in amphitheaters in Greece and Cyprus.

WHY FORDHAM
“I started out here as a carpenter in the shop, got promoted to scene shop foreman and then to technical director. I enjoy the work because it’s not a 9 to 5 schedule, and every show is different. Fordham allows me a great deal of creativity in taking and interpreting design plans, coming up with how to build something, and in dealing with the stumbling blocks that appear during construction.”

COMBAT IN HAMLET
“Hamlet has one big swordfight, where, in the scuffle involving a poison-tipped sword, he kills Laertes. Other bits of violence include a scene where Polonius gets stabbed behind a curtain, and a fistfight at Ophelia’s grave. In teaching combat, first and foremost we teach safety. Never lunge until you have established eye contact and you know your partner is ready for you. We also have to build a fight so that it works within the confines of the stage. We try for dramatic, big movements. Basically we are choreographing a dance of violence.”

STAGE DESIGN AND ILLUSION
“Building a set is dealing with the reality of making an illusion. Where are the sight lines? What does the audience see and not see? There are moments early on when I see a light leak, or an edge that does not look right. But after you have been through the show a couple of times you stop looking at all of that and it just becomes magic. You forget that right behind that beautiful piece of scenery are three sets of costumes, shoes, an actor and a stagehand with a mike who is ready to direct the next person out.”

OUTSIDE INTERESTS
Influenced by his father, who built the home in which he grew up, Tim enjoys working on his three-story Victorian with a tower and four fireplaces. Tim is also learning ballroom dancing, and, as the only male in a family of four (wife and two teenage daughters) he has plenty of practice partners.