skip to main content
Return to Fordham University
You are at:Home»Inside Fordham»Fordham At Work: Noel Nevin 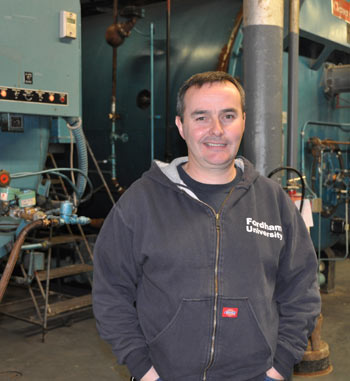 WHO HE IS
Steam and Refrigeration Engineer, Facilities Management

WHAT HE DOES
Noel is primarily responsible for the high-pressure steam boilers at Rose Hill, which generate steam and deliver it through the entire campus network. He makes sure that nearly 40 buildings are heated and cooled, depending on the season.

BACKGROUND
He moved from Ireland to the United States in the 1980s, at first working in construction. He then attended night school at Lehman College, thinking he would like to teach. After learning from his wife’s uncle about a facilities position at Fordham, he jumped at the opportunity, excited about the chance to study with tuition remission. While working as an apprentice and completing courses for his refrigeration and stationary engineer’s licenses at the union trade school, he received a bachelor’s in English from Fordham—a “great degree for an Irishman,” he noted.

WHY FORDHAM?
“I decided to stay in my facilities position because I loved it and I work with a great bunch of guys. I love the campus too, and working with the people. There are some fantastic people here.”

HIGH STAKES
“I make sure that the boilers are operational and safe, that there is little downtime and we are incident-free—which is the biggest responsibility we have. People forget how devastating steam energy can be, like the ConEd incident in Manhattan in 2007.”

COMPUTERIZED COMFORT
“Once I take care of the boilers, I go to the building management system, which is computerized, and make sure that everybody has heat in the wintertime and everybody is cool in the summertime. It’s Web-based, so we have all of the information right here in the boiler room. I can arrive in the morning and see how Father McShane’s office is doing with one click.”

CAREER HIGHLIGHT
“Responding to the blackout in August 2003 that affected all of New York. I brought my two daughters in with me because my wife was away and I had no babysitter. Working with my co-workers and the director of facilities, Kevin O’Brien, we strung wires everywhere and got the air conditioning going in the Walsh library off the emergency generator. That allowed the University to bring in all of the priests who were sick, as it was so hot. Students who had asthma or who just wanted a cool place to sleep all came to the library. There was no power anywhere in the city, so at least they had a little refuge on campus where it would be cool.”

OUTSIDE INTERESTS
When not at work, he enjoys following Irish soccer and Gaelic football leagues. He and his son also attend all of Fordham’s home basketball games. His love of reading continues, and he particularly likes John Steinbeck and John Updike.