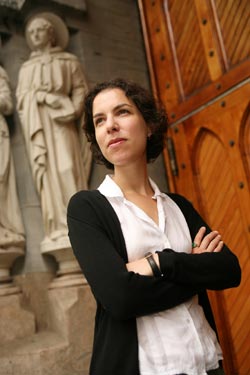 For an art historian, there may be no better city in the United States in which to live than New York. The breadth and depth of museum and gallery choices is staggering. For Nina Rowe, Ph.D., assistant professor art history, the fact that Manhattan is her hometown, and that her mother previously taught in Fordham’s English department, where her husband is now a faculty member, is simply icing on the cake.

“It’s so good to be back,” says Rowe, who lives near the Cloisters, a branch of the Metropolitan Museum of Art dedicated to the art and architecture of the Middle Ages. It is a favorite spot for her, as she also teaches in Fordham’s medieval studies program. “It’s the greatest place in the world to be an art historian.”

Rowe has been at Fordham’s Department of Art History and Music on the Rose Hill campus since the fall of 2004, two years after receiving a doctorate in art history at Northwestern University. She spent nearly 20 years away from New York, studying languages and art at Oberlin College, the University of Texas at Austin and in Florence, Italy, where she discovered her passion for medieval art. She previously held visiting faculty positions at the University of Notre Dame and Middlebury College, and was an adjunct assistant professor at DePaul University.

Rowe won’t be teaching classes this year, though. She received fellowships from the Metropolitan Museum of Art, the Memorial Foundation for Jewish Culture and the Leo Baeck Institute to write a book based on her study of sculpture at three medieval cathedrals in Bamberg, Germany, and Strasbourg and Reims, France. (Fordham is also supporting her year of study.)

Rowe will visit the cathedrals and the cities’ libraries, as well as meet with prominent art history scholars while abroad. She will be gone for most of the fall.

Rowe won’t be teaching classes this year, though. She received fellowships from the Metropolitan Museum of Art, the Memorial Foundation for Jewish Culture and the Leo Baeck Institute to write a book based on her study of sculpture at three medieval cathedrals in Bamberg, Germany, and Strasbourg and Reims, France. (Fordham is also supporting her year of study.)

Rowe will visit the cathedrals and the cities’ libraries, as well as meet with prominent art history scholars while abroad. She will be gone for most of the fall.

Rowe’s interest in the topic goes back to her dissertation,Monumental Fictions: Personifications of Synagogue and Church on Thirteenth-Century Cathedral Façade. Her research focuses on the depiction of Judaism and Christianity, represented as the paired female figures of Synagoga and Ecclesia, in the massive European cathedrals of the 13th century, when the towering cathedral reached its apogee.

Rowe says that at the time European cities were thriving and had become the center of economic and spiritual life. “The buildings,” she says, “were absolutely teeming with monumental, lifelike sculptures,” carved out of limestone and displayed at ground level (as in Strasbourg), on pillars or pedestals (Bamberg) or mounted high above (Reims). Because of their placement outside the churches, Rowe is intrigued by “the way they address urban audiences.”

The figures of Ecclesia and Synagoga were a common motif integrated into larger sculptural programs. Ecclesia is usually depicted as wearing a crown, holding a chalice and battle standard, while Synagoga carries a broken staff and is blindfolded; her crown is absent or slipping from her head and she is dropping the tablets of law.

Synagoga is often depicted as being extremely beautiful—“the beautiful but broken synagogue,” Rowe says. Much of the complex history of Judeo-Christian relations can be seen in Synagoga-Ecclesia motif, which made its earliest appearance in the 9th century, often in crucifixion scenes, with the pair standing at the foot of the cross. “What I’m interested in,” she says, “is what this beautiful image does.”

By the 12th century, “there were increasing social and economic restrictions on Jews,” Rowe says, and varying Christian perceptions of them as a people to be, as St. Augustine believed, preserved “as keepers of the old law.” As the market economy developed and Christians were forbidden by Scripture to charge interest on loans to fellow Christians, rulers turned increasingly to Jews to extend credit, which was in great demand in the expanding economy. Thus many Jews became wealthy but were also heavily taxed.

It was only natural that this complicated relationship would find its way into the art of the period. “Scholars often speak casually about figures as conveying Christian ideas about Jews,” says Rowe, who was raised in a secular Jewish household, “but what does it mean politically?”

The question fascinates her, which isn’t surprising. For Rowe, art has always been about so much more than just appearances. Although as a child she spent Saturdays studying at the Art Students League in Manhattan, and in college created etchings, paintings and drawings, Rowe never quite found her own unique creative voice.

“I didn’t know what to express in art,” she says. “I was skilled as a practitioner” and likely would have flourished, she says, as an apprentice in a 13th century studio, taking direction from a master artist at a time when subject matter—religion—wasdictated to the practitioner. Fitting, then, that this period should so capture her imagination.

She hopes it will capture her students, too. “I love having students in the early 21st century realize that things that are so remote geographically and temporally can raise issues that are relevant,” Rowe says, “and that they can say something about them.” Rowe encourages her students to bring those same critical thinking skills to bear on their own worlds, saturated as they are by such things as the Internet and billboard advertising.

For herself, Rowe anticipates moving on after her year of research to a new topic: carved ivory of the 14th century. When asked to name a favorite piece at the Cloisters museum, she is momentarily stumped. “My favorite thing changes,” Rowe says, but she finally settles on a 12th century Romanesque ivory processional cross, the Cloisters Cross, less than two feet tall and carved with more than 92 figures, including, of course, Synagoga.