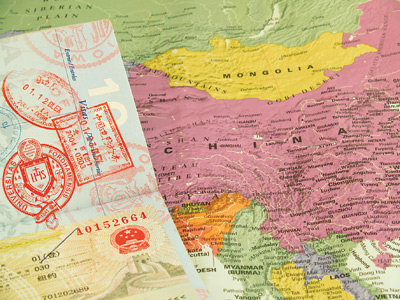 “Fordham has a deep, rich, and longstanding partnership with Peking University in Beijing. This relationship has served as the foundation for our international initiatives in China, where we offer critical programs to international students and opportunities for faculty and students alike.”

Half a world away, China would seem a difficult place with which to forge close and lasting partnerships.

In fact, that is just what Fordham is doing. From research collaborations to joint degree programs, Fordham has spent the last several years partnering with universities in Beijing, Shanghai, Hong Kong, and other areas.

“I’m extremely proud of our global outreach,” said Stephen Freedman, Ph.D., provost of the University and professor of ecology and evolutionary biology.

“Fordham has a deep, rich, and longstanding partnership with Peking University in Beijing. This relationship has served as the foundation for our international initiatives in China, where we offer critical programs to international students and opportunities for faculty and students alike.”

In this sense, Fordham is in the vanguard of a national trend. Colleges and universities across the country are reporting that the number of students matriculating from China has reached an unprecedented high.

As of fall of 2012 at Fordham, Chinese non-immigrant students—ones who will repatriate after graduating—account for more than half of international students. Overall, these 164 undergraduates and 599 graduate students make up more than 5 percent of the student body.

According to the Office of International Services, this number has grown almost 150 percent since 2006.

With equal zeal, Fordham has reached out to Chinese colleges and universities in an effort to cultivate relationships.

Fordham formed its first partnership nearly 15 years ago in 1998. At that time, Ronald Anton, S.J., established the Beijing International MBA program (BiMBA) at Peking University’s National School of Development, one of China’s most prestigious institutions of higher education.

“This was the first time the Chinese Ministry of Education permitted a foreign university to confer a foreign degree on Chinese domestic students,” said David Gautschi, Ph.D., dean of the Graduate School of Business Administration (GBA), where 30 percent of students are Chinese nationals.

In response to rising demand, GBA and Peking launched a jointly administered Master of Science in Global Finance in 2010. Underwritten by a $1 million grant from the NASDAQ OMX Educational Foundation, the program’s curriculum begins in Beijing and concludes in New York. Just three years later, the program has nearly 150 alumni.

In September, GBA and Peking University began another joint degree program, the Master of Science in Investor Relations. Also funded by NASDAQ OMX, the program is co-taught by GBA and Peking faculty members. Several other new programs are under consideration in areas such as health care management, big data business analytics, and entrepreneurship.

The two universities are developing strong research collaborations. This spring, faculty members will participate in a joint research colloquium, which will eventually become a biannual gathering.

“The feedback on the two courses has been off-the-charts positive,” Gautschi said. “I think this is going to raise our profile quite significantly and will acquaint our faculty with contemporary issues in China.”

About 600 miles south, in Jiangsu Province, China’s Southeast University also recently joined with GBA. The joint degree in global finance commenced last year, while the investor relations program is on its way.

These partnerships are critical as China continues to enhance its growing presence on the world stage. 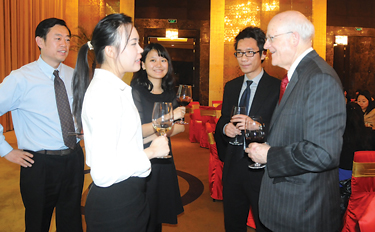 “This is the most remarkable development that has taken place in the last several centuries, and it has happened so quickly,” Gautschi said. “China is becoming more and more integrated into the world economy, and businesses are going to have to figure out how to function across the political frontiers.

“There are a whole host of research questions for our faculty—how China is going to navigate this transition and how receptive the environment will be for finance as we understand it in the West.”

With a rapidly growing economy comes a heightened demand for social services. The Chinese government reports that by 2020, it will increase its number of social workers tenfold, from the current 200,000 to 2 million.

Anticipating this boom in the field, GSS is working to connect with Chinese social work schools to prepare faculty and future social workers. In 2010, the school formally joined with China Youth University for Political Science (CYU), which boasts the first and largest school of social work in mainland China. Since then, GSS faculty members have traveled to Beijing several times to teach courses, offer professional training to social work educators and practitioners, and exchange research.

Last summer eight students from CYU traveled to Fordham for a course, Frontiers of Social Work Theory and Practice in the United States.

“Even though they’re social work majors in China, the profession is very new,” Gao said. “They don’t have the opportunity to see how social work actually works, but here they met over 100 social work educators, practitioners, and clients.”

GSS and six other universities have been selected for a national initiative to help China prepare its projected 2 million new social workers. The China Collaborative, established by the U.S. Council on Social Work Education and the China Association of Social Work Education, will pair these seven American social work schools with Chinese schools to develop master of social work programs.

“The world is becoming global, and the distance is disappearing quickly,” Gao said. “For GSS, China is a unique opportunity.”

GSS and GBA are joined in their efforts by Fordham Law, which has an existing student exchange program with China University of Political Science and Law and an emerging program with Fudan University in Shanghai.

In October, the school announced a partnership with the Chinese Business Lawyers Association (CBLA), becoming the first law school to be an institutional member of the group. As such, Fordham students will gain exposure to the Asian legal field through mentoring programs and CBLA events.

“China is an important emerging market that can’t be ignored, certainly not in the law world,” said Toni Fine, assistant dean for international and non-JD programs, who said that 20 percent of current students in the L.L.M. program are from China.

“Between the number of students coming here from China, and the amount of work generated from the region, it’s important to have a better understanding of their culture and legal system,” she said.

Under the direction of the provost, Fordham has joined with other American Jesuit universities to explore forming a four-year undergraduate liberal arts college in Hong Kong. The school, which could generate future student and faculty exchanges, would be the first Jesuit university in China.

“A university in the 21st century has to see China as being something it needs to understand, because there is a remarkable evolution that’s taking place and we’re obliged to know about it,” Gautschi said.