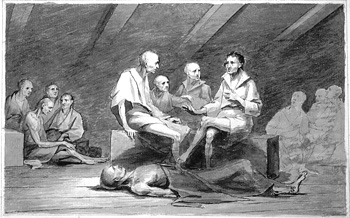 A sketch by John Trumbull, who documented the Revolutionary War while traveling with Washington’s army.
Image courtesy of Fordham University Libraries

For the first time, Fordham has put on display in the William D. Walsh Family Library a sizeable portion of the Charles Allen Munn Collection of Revolutionary War artifacts, memorabilia and Americana.

Some 50 drawings, broadsides, diaries and letters from the collection—including one lengthy military diary written by George Washington—will be on display in the library’s Exhibition Hall through July.

The last time that many of the documents were displayed was in 1943 in the Duane Library, said James P. McCabe, director of libraries. “As a result, several generations of students and faculty have never seen them,” he said.

If put up for auction, McCabe said, the Munn Collection would “attract bids from the most famous universities” and would likely be worth $1 million or more.

Surprisingly little is known about Charles Allen Munn, who died at age 64 in 1924 after 43 years as owner and editor ofScientific American magazine. It is established that he descended from a wealthy family of magazine editors, graduated from Princeton in 1881 and was an avid collector of the nation’s early art and Americana.

“You would think that, being from a publishing family, there would be photographs of him, but we have none,” said Patrice Kane, head of Fordham’s archives and special collections. “His whole family is rather mysterious.”

Munn’s collection, on the other hand, is widely known and well represented at museums including the Metropolitan Museum of Art, where the Munn room features many of the portraits that he purchased.

A portion of his collection was bequeathed to his niece, Augusta Munn Tilley—also an editor at Scientific American. Tilley, a Catholic convert and friend of the Jesuits, left her collection to Fordham in 1943 when it was under the leadership of Robert Gannon, S.J. 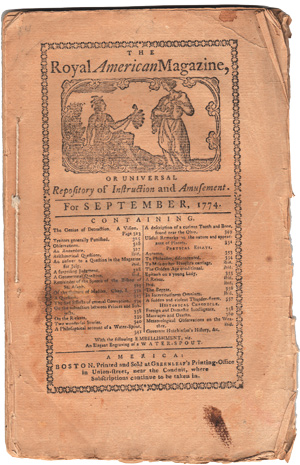 A copy of Royal American Magazine from 1774 is on display at the William D. Walsh Family Library as part of the Munn Collection.
Image courtesy of Fordham University Libraries

Highlighting the current display is a series of letters bearing famous signatures of notable figures in the decades around the Revolutionary War. Signatures on display include those of Washington, Benjamin Franklin, John Quincy Adams, Paul Revere and, perhaps most distinctively, John Hancock.

Other notable pieces include a series of drawings and maps by the artist John Trumbull, brother of George Washington’s secretary, Jonathan Trumbull.

“John Trumbull was considered the ‘Matthew Brady’ of the Revolutionary War,” Kane said. “He obviously didn’t have a camera, but he had a sketch pad and he traveled with General Washington documenting whatever he saw.”

One of the most unique drawings, said Kane, is a sketch done in 1790 of an American Indian, Hopothle Mico, who most likely served with Washington.

“Trumbull probably drew the sketch of him when he wasn’t looking,” said Kane, “because the early Indians were very apprehensive about having their image reproduced.”

The oldest documents in the Munn Collection consist of two letters written by William Penn, prominent Quaker and founder of Pennsylvania, in 1685.

The library has some images from the collection online  at  www.library.fordham.edu/archives/munn_manuscripts.html, but seeing the actual documents “written in the hands of the most famous figures in American history” is something to behold, McCabe said.