Fordham has again been listed as one of the top national universities in the latest edition of U.S. News & World Report’s “America’s Best Colleges” rankings. 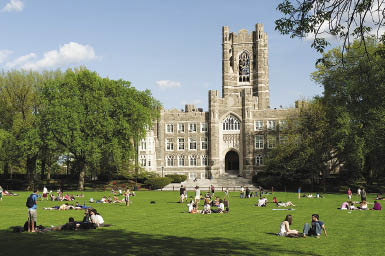 The annual survey, published Sept. 13, listed Fordham at No. 53 among the top 280 universities in the United States, up from No. 56 last year. The 2012 ranking sets a new benchmark for the University, which has climbed steadily from 84th place in 2002.

“You should know that we attribute this rise to a belated recognition of a Fordham education’s worth, as much as any other factor; worth that is the result of hard work, dedicated teaching and diligent research by thousands of students, faculty and staff,” said Joseph M. McShane, S.J., president of Fordham.

“Therefore, while this much-deserved recognition comes but once a year, it is earned daily.”

For the second year in a row, Fordham shared its ranking with Boston University.

Among the nation’s Catholic universities, Fordham placed fourth behind the University of Notre Dame (20), Georgetown University (22) and Boston College (31), but was the only one of those four schools to rise in rank.

“While we are naturally proud of our national reputation, the Fordham community is prouder still of our students and alumni, and of the research produced by our peerless faculty,” Father McShane said. “It is a blessing to serve a community so rich in talent and dedication, and so firmly grounded in the Jesuit tradition.”

The University maintained its 90 percent retention rate for freshmen and increased its undergraduate academic reputation index from 68 to 70. Fordham also claimed the distinction of being one of 12 schools in the top tier that had no more than 2 percent of its classes larger than 50 students.

The average alumni giving rate climbed, too, from 23 to 25 percent.

U.S. News began publishing its rankings in 1983. Today, it is one of the most influential magazines to publish national college comparisons. The annual lists rank more than 1,500 schools in a number of categories based on—among other features—peer assessments, graduation and retention rates, faculty resources and student selectivity.

The magazine then assigns each school with a group of its peer institutions based on categories developed by the Carnegie Foundation for the Advancement of Teaching.

The 280 top-tier universities offer a wide range of undergraduate majors as well as master’s and doctoral degrees, often with an emphasis on research. The 2012 category includes 172 public, 101 private and seven for-profit universities.