skip to main content
Return to Fordham University
You are at:Home»Inside Fordham»For the Class of 2011, It’s First Day at Fordham 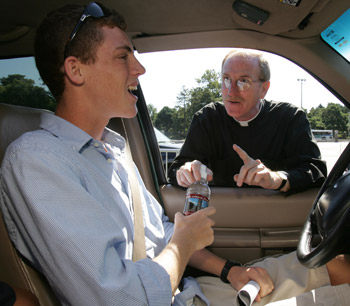 Joseph M. McShane, S.J., president of Fordham University, dispenses Fordham bottled water and some advice to freshman Andrew Brown as he arrives on the Rose Hill campus on Sept. 2.
Photo by Bruce Gilbert 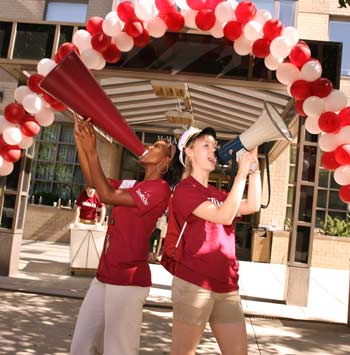 To say that 18-year-old Gwen Rathbun was taken aback by the way Fordham University upperclassmen made her move-in experience a piece of cake is an understatement.

“They didn’t even let me carry my purse!” the Maryland native said as she enjoyed a bagel with her parents on a bench outside of the McGinley Center at the Rose Hill campus. “It was wonderful.”

The Fordham tradition, in which student orientation leaders carry all of the incoming freshmen’s belongings to their rooms, wasn’t the only surprise for members of the Class of 2011 and their families as students moved into the residence halls at the Lincoln Center and Rose Hill campuses on Sept. 2. Many were personally greeted by Joseph M. McShane, S.J., president of Fordham, as they drove onto the Rose Hill campus.

“It was nice and made me feel that I definitely made the right decision on what school to go to,” said Zach Insani, 18, of Williamsburg, Va. “He was so personable. Everyone has been so helpful. I’m looking forward to the next four years.”

Father McShane was just as excited to meet the Class of 2011. He put nervous parents at ease by asking them about their trips to New York City, and made the incoming freshmen smile, even ribbing some of the Boston Red Sox fans with playful New York Yankees talk.

“This is a great class,” Father McShane said. “They’re very talented—the most competitive class we’ve had at Fordham to date.”

In fact, some 21,967 students applied for admission to the Class of 2011, marking the first time the University received more than 20,000 applications during an admissions cycle. It was also the 16th consecutive year in which applications to Fordham increased.

So what’s driving the soaring numbers?

“We’re reaching out to a greater volume of students much earlier in the college selection process and encouraging them to visit our campuses,” said John W. Buckley, assistant vice president for undergraduate enrollment. “There are numerous academic opportunities that attract students to Fordham, including the new integrated learning communities, honors programs, internships and preparation for post-graduate scholarships and fellowships. 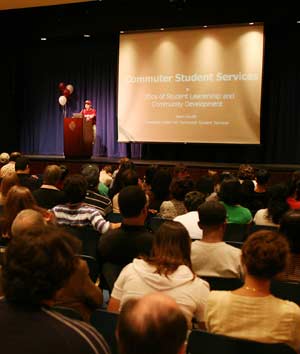 Commuter students received a rundown of all the services available to them at a session in Pope Auditorium on the Lincoln Center campus.
Photo by Michael Dames

“In my 23 years at Fordham, this appears to be the strongest class from an academic vantage point,” he said. “The level of competition was extraordinary as reflected by the acceptance rate.”

Fordham’s acceptance rate is now down to 42 percent, a drop of four percentage points from last year. And the average SAT score for this year’s class jumped 28 points, to 1,230. Additionally, 76 percent ranked in the top 25 percent of their high school class, a 6 percent increase from last year.

Thisfreshmen class, more than 1,700 strong, is also multicultural. Some 26 percent of this year’s freshmen identified themselves as members of a minority group. Hispanics remain the largest minority group, at 12 percent.

Moreover, the freshmen are geographically diverse, hailing from 42 states, including a strong showing from California. Seventy-one students are from that state, a 4 percent increase from last year.

The traditional move-in day at both campuses is designed to encompass all incoming students, whether they plan to live on campus or not. A large tent was set up on the lawn in front of the McGinley Center for commuter students to register and gather information packets. The Lincoln Center campus also had special events for commuter students to mingle with others in the incoming class. 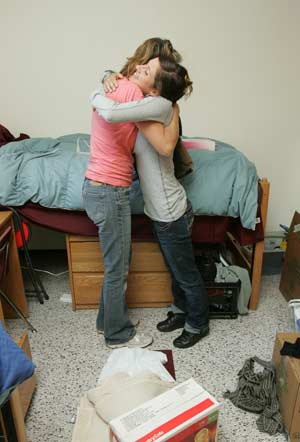 Freshman Patricia Shields hugs her mother after moving into her room at Tierney Hall. There were many fond farewells at both campuses throughout move-in day.
Photo by Bruce Gilbert

FCRH junior Julia Castagna, a commuter student and orientation leader, said she chose to volunteer in an effort to make the transition to college easier for all incoming students, whether they plan to commute or live on campus.

“I remember being nervous and thinking I’d never meet anyone when I was a freshman,” said Castagna, who commutes from Westchester County. “This way everyone gets introduced to other students while learning the basics about Fordham at the same time.”

Steven Leporin, 18, from Dix Hills, N.Y., was one of those new commuter students. For him, Fordham’s Rose Hill campus was not far from home and an academic powerhouse, so the decision was easy. “Fordham is on the rise,” Leporin said. “There’s a lot of pride when you say you go to Fordham.”
Cecilia Nardi, who moved into her new digs at the Lincoln Center campus on Sept. 2, grew up in Portland, Maine, and when it came time to chose a school, Fordham was the obvious choice given her major: international studies.

“Living in the city was a major factor in my decision to come to Fordham,” said Nardi. “Living where I can definitely have an international experience is a real plus.”

Meng Zhang traveled to the Lincoln Center campus from Beijing. She will major in communication and media studies and Zhang couldn’t imagine a better place to kick off a career. “I think New York is the world’s capital,” she said, “and it’s the best place to study media.” 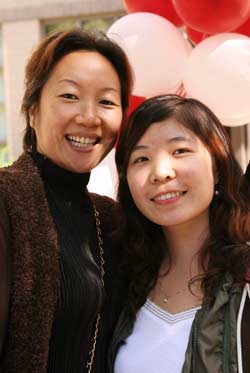 FCLS freshman Meng Zhang (right) and her mother Feng Jih may have traveled the furthest. They are from Beijing.
Photo by Bruce Gilbert

But Zhang is not only attending Fordham to study. Having traveled from a country half the world away, she is ready to jump into the Fordham experience. “I’m really excited about getting to know new friends,” she said. “I really feel comfortable at Fordham.”

In all, 220 freshmen moved into McMahon Hall at the Lincoln Center campus and 1,100 freshmen took up residence on the Rose Hill campus, including the newly renovated Tierney Hall.