Christine Shim got her first lesson in the importance of education at age six. 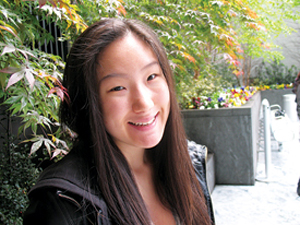 That’s how old she was when her mother took Christine and her brother halfway around the world, from Korea to Queens, N.Y., so they would grow up in a society that offered more educational opportunities to women.

“She saw how my future would be limited if we continued living (in Korea),” said Shim, who is graduating with a master’s in social work from the Graduate School of Social Service (GSS).

But it wasn’t an easy move. Shim’s father stayed behind in Korea, so Shim’s mother raised them on her own, working in a beauty salon in Flushing. She constantly drove home the importance of education, shaping her daughter’s future in more ways than one.

Shim vigorously pursued her education, completing bachelor’s and master’s degrees in an unbroken five years while working multiple jobs to financially help her mother and brother, who is six years younger.

And now her career ambitions revolve around education as well. As an intern at the United Nations during the past semester, she found her calling: creating educational opportunities in parts of the world where they’re scarce.

Like the part of Korea where she spent her early childhood.

“A lot of people take (schooling) for granted because there’s public education systems here,” unlike in Korea, where education was only open to those who could pay for it, she said. “In industrialized countries we get to choose, and we have a lot of options laid out for us, but in these developing countries … they don’t really have any choice but to actually survive day by day.”

This past semester, as a UN intern, she worked with Close the Gap International, a Brussels-based nongovernmental organization that helps Western companies donate their used computers to students in developing countries. Her job was “basically networking,” she said—spreading the word about the organization and looking for opportunities to advance its work.

Today, she wants to become head of projects for an organization of this type. For her master’s, she pursued a management track that’s suited to international development and community-building around the globe. It’s a less-known type of social work that calls for designing sustainable aid projects by gaining a keen understanding of a community’s needs and wants, she said.

The needs of her own family have always figured prominently in her life. It was her family that drew her back to New York from Pennsylvania, where she attended Dickinson College for her first semester.

During her last year of high school, her father had joined the family in New York for the first time since she was six. When he died of cancer during her term at Dickinson, she transferred to Fordham to be close enough to give her family emotional and financial support.

It was a hard decision; she had to give up a full ROTC scholarship to Dickinson. And at Fordham, she has put in long hours commuting from Queens, and balancing paying jobs with her studies.

But her family’s financial situation only reinforces her drive to excel. “I just want to do better,” she said. “It gives me a reason to be successful.”