skip to main content
Return to Fordham University
You are at:Home»Inside Fordham»Flora and Fauna Expert Describes Preservation Challenges in Hawaii

David Burney, Ph.D., a former Fordham biology professor, returned to the University on Dec. 2 to discuss conservation efforts in Hawaii and his work to restore its ancient ecosystem.

Although the state is generally considered a paradise, he called it the extinction capital of the United States. It occupies 1/500th of the nation’s land area, but is home to 319 endangered plants—almost half of the total list. 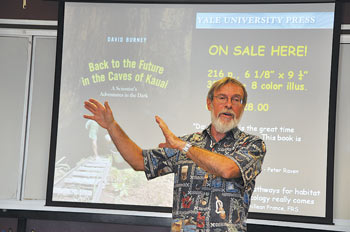 ey explained how a collapsed limestone cave on Kaua’i—the oldest of the main Hawaiian islands—revealed evidence of cultures and creatures from thousands of years ago. He called the cave, which is one of the few not formed by volcanic activity, a “low-tech time machine.”

“It works really great for understanding the past, because everything that ever fell in there, essentially, is still there, and is still preserved,” he said.

“It’s a poor man’s Jurassic Park, in the sense that we’re trying to reconstruct the prehistoric landscape,” he said. “There aren’t any plants that are going to eat you, but it does help people visualize what we’ve lost in Hawaii.”

Burney, an adjunct professor at the University of Hawaii-Manoa and the Université d’Antananarivo (Madagascar), chronicled his discoveries in the book Back to the Future in the Caves of Kaua’i: A Scientist’s Adventures in the Dark (Yale Press, 2010).

Key to his work is upending the premise that some species can thrive only in specific climates. The palila, a finch that lives at a particular elevation on the side of Hawaiian volcanoes, is a good example, he said, because fossils discovered in the cave prove that the birds’ range once was much wider.

“This bird has survived because its natural enemies, like rats and pigs and fire, simply haven’t reached them there. It turns out that their present location is one of the places they’ve managed to hang on.

“It implies that a lot of rare species are not necessarily growing in their optimal habitats,” he said. “Maybe they’re growing on cliffs, so people assume, ‘This is a cliff-dwelling plant.’ In fact, it’s growing on cliffs because it’s the only place the goats couldn’t reach it. “

During his excavations, Burney has discovered fossils of numerous insects and flightless birds, including a duck whose eyes were so tiny it may as well have been blind. All told, the site has yielded the fossils of 107 birds that inhabited the Hawaiian Islands before Captain James Cook arrived in 1778. Of those, 31 remain, and only 11 are not endangered.

In 2001, he began planting native plants around the cave site, in the hope of reintroducing them into the larger ecosystem. Today there are more than 5,000 such plants on the site, representing 100 species. Most of them were found in fossilized form in the cave.

The project that began at the en-trance to the cave has expanded, due in large part to the work of volunteers.

“We’re involved in projects from Puerto Rico to Northern Japan—getting the public interested in archaeology and history, and then moving into forest restoration and wildlife habitat,” he said.

Burney delivered “Paleontology Reshapes the Future in the Hawaiian Archipelago” on the Rose Hill and Lincoln Center campuses.