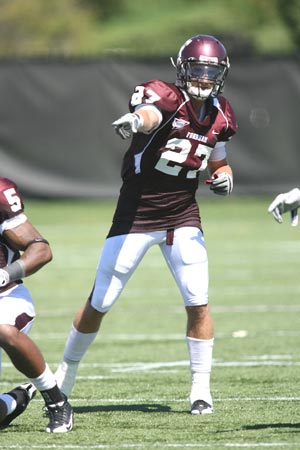 Five members of the Fordham University football squad have been named to the All-Patriot League team for 2008.

DeMarco, a two-year starter on the defensive line, finished the season with 43 total tackles, 28 solo, including a team-high 12.5 tackles for a loss, and four sacks. He ranked third in the Patriot League in tackles for a loss and ninth in sacks.

Loucks, a two-year starter at free safety who missed two games this year due to injury, notched 56 totals tackles in 2008, third best on the team, including 37 solo stops.
Mehra, a two-year starter on the defensive line and a Second Team All-League pick last year, closed out the season with 38 total tackles, 25 solo, including 11 tackles for a loss and a team-high 5.5 sacks.

DeMarco, Loucks, Mehra and Crockett were part of a defense that recorded two shutouts in 2008, tying the Patriot League mark for most shutouts in a season.

Sarabaez, a two-year starter who opened 10 games at right tackle and one at left tackle in 2008, was a cog in an offensive line that helped sophomore running back Xavier Martin become the sixth Ram to rush for more than 1,000 yards in a season. The line also protected junior quarterback John Skelton, who set the Fordham career record for passing yards this season, accumulating 6,215 yards.