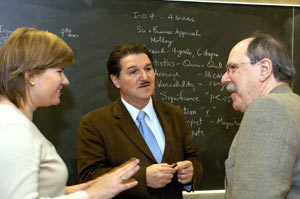 Where were the healthy skeptics when we needed them?

Veteran journalist Lisa Finnegan, GSE ’03, posed that question in a lecture, “Media’s Role in a Democracy,” held at the Lowenstein Center, Lincoln Center campus, on Jan. 23, as part of the Fordham Psychology Association lecture series. Finnegan’s new book, No Questions Asked (Praeger, 2006), paints U.S. journalists as silent partners in the Bush administration’s rush to war following 9/11 for not asking tough questions, even when evidence suggested that the administration was lying.

“Exhibiting skepticism is a major part of reporters’ jobs,” Finnegan said. “It is not their job to say, we believe the president. It is their job to question. When they don’t, they need to be held accountable. Whether you like it or not, journalists are part of the political process in this country. They influence election outcomes and the support for wars.”

Finnegan said that many administration assertions that went unquestioned in post-9/11 media accounts simply “haven’t withstood the test of time.” She said that a study by the Program on International Policy in 2003 found that:

• 69 percent of Americans believed that Iraq was involved in the 9/11 attacks.

• 52 percent believed that there was a link between Saddam Hussein and Al Qaeda.

• 22 percent believed that the U.S. had found weapons of mass destruction in Iraq.

“These were the headlines we were reading and none of the information was true,” she said. “What I find most baffling is that many [Americans] believed that world opinion was in favor of the war.”

The lecture also covered censorship, fear of authority and propaganda in the media. Finnegan cited a “war of words” that she said helped propagandize the Iraq war and create a false image of reality. Expressions such as “coalition of the willing,” “enemy combatants,” “smart bombs,” “resistance fighters,” and “liberators,” even affected the journalists using the expressions in their dispatches, she said.

“What is the difference between state-run papers, like Pravda, and the New York Times, if our reporters only stenographically report what they are told?” she said. “I don’t think there is any.”

It is up to the public, she said, to keep the news media on track.

Paul Levinson, Ph.D., professor of communication and media studies and chairman of the department, concurred with Finnegan’s research but placed different emphasis on who was ultimately at fault. Levinson admonished the judiciary for sending reporters to jail for not revealing sources, and mentioned Judith Miller, of the New York Times, in particular. Miller spent three months in jail in connection with the Valerie Plame investigation, trying to protect her sources who implicated the White House staff in the alleged leak of the CIA agent’s identity.

“The legal principle of a free and vigorous press, unpersecuted by the government, is embodied in the first amendment,” Levinson said. “That’s the first, not the third or the fifth. There is nothing more important than that. The greatest danger isn’t what reporters do report, it is what reporters are prevented from reporting.”

Finnegan was a graduate student at Fordham when the 9/11 attacks occurred. She collaborated with her teacher, Harold Takooshian, Ph.D., professor of psychology, on a study of attitudes toward terrorism. Together, they wrote an article for the Fordham Urban Law Journal in 2003, “The USA Patriot Act: Civil Liberties, the Media, and Public Opinion.”

Takooshian introduced Finnegan at the event. “After the tragedy, instead of being daunted by the events, Lisa decided to research this topic and write about it,” he said. “That was much to her credit.”