skip to main content
Return to Fordham University
You are at:Home»Inside Fordham»Finding the Other Side of the Arts in a Collaborative Juilliard Class 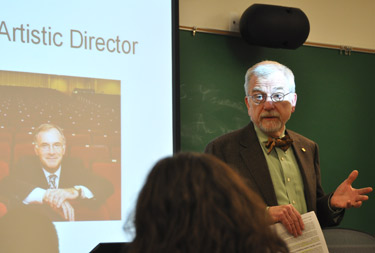 Students from Fordham University and the Juilliard School are receiving unique insight into the business of the performing arts, thanks to a new academic collaboration.

Bill Baker, Ph.D., Claudio Aquaviva Chair and Journalist in Residence at Fordham, is teaching “Understanding the Profession: The Performing Arts in the 21st Century” at Juilliard, one of the world’s most prestigious performing arts conservatories.

“You can’t go out in the world today—no matter how talented you are—unless you have a grasp of the business you are entering,” Baker said. “This course seemed like a perfect opportunity to give students access to some of the most important people in the performing arts business.”

Roughly 18 students, including seven from Fordham, are enrolled in the class. Most are majoring in visual arts, theatre and music, and three are from the College of Business Administration (CBA) at Fordham. There is a waiting list for the class at Juilliard.

Fordham College at Lincoln Center senior Lisa Errera said that when she graduates this May with a degree in visual arts, the struggling economy will be just one of several hurdles to her finding a job.

“This is New York City; the competition is intense,” said Errera, who will earn a degree with a focus on photography. “I know it won’t be easy to find a well-paying job in the city in such a field.”

Errera enrolled in Baker’s course to explore working behind the scenes.

“Learning business for the performing arts is key because it can help you further your career on the administrative side of the arts,” she said. “If you had asked me a couple of years ago, I would not have had an interest in working on that side of the arts. Now, if I can get a job on the business end, I can stay in the arts and not have to starve.”

As Errera learned from a guest lecturer from Carnegie Hall on Feb. 24, the business side of the performing arts is anything but boring.

“When you run an organization that operates completely through the generosity of benefactors, there is no protection. You’re always living on the edge, and that’s exciting,” said Clive Gillinson, executive and artistic director of Carnegie Hall, which brings in about $25 million in gifts each year.

“In the end, all fundraising is about relationships,” he said. “Donors have got to trust your vision.”

“Money follows vision—that’s my mantra. You have to have a vision that is utterly compelling,” he said.

Under Gillinson’s leadership, Carnegie Hall implemented The Academy, a two-year fellowship program for young professional musicians that is run in collaboration with the Juilliard School, Weill Music Institute and New York City Department of Education. Since 2007, Carnegie Hall has hosted international festivals such as “Berlin in Lights,” a snapshot of contemporary Berlin through performance. The Berlin festival was made possible through generous support from philanthropist Anna-Maria Kellen, another guest at Baker’s Feb. 24 class.

“When I told her about our vision for the festival, she instantly said, ‘This is something I want to help you with,’” Gillinson said. “From that moment on, we effectively got the endorsement. Those are the really moving moments in one’s life, when you share a vision.”

The collaboration between Fordham and Juilliard was the vision of Robert R. Grimes, S.J., dean of Fordham College at Lincoln Center, who began discussing the possibility with Joseph W. Polisi, president of Juilliard, about 10 years ago.

“It always struck me as very odd that we sit staring at one another across Lincoln Center for the Performing Arts and yet we haven’t cooperated in some time,” said Father Grimes, who found the two schools share some early history.

In the late 1960s, professors from Juilliard taught liberal arts classes at Fordham, and some Fordham theatre graduates worked as crew members for Juilliard productions.

“But then it faded,” Father Grimes said. “I hope this is the first of many collaborations. Already their liberal arts faculty are welcome to use our library, and we’re working on a faculty exchange for next spring.”

Polisi, president of Juilliard, said that the class is important for every performing arts student.

“One cannot think they are just going to play the clarinet—that’s not the way it works in the world,” Polisi said. “This class will stimulate their entrepreneurial spirit.”