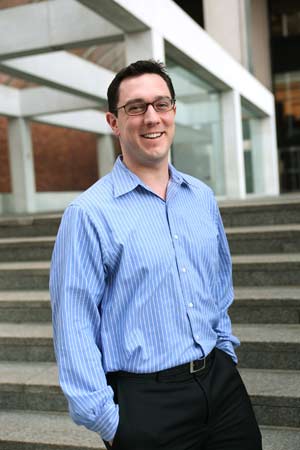 Ryan Butkus earned his M.B.A. while working at Citigroup.
Photo by Michael Dames

Employers won’t ever have to worry about whether Ryan Butkus can juggle more than one job.

While pursuing his master’s degree in finance, the 30-year-old GBA graduate took finance books on a vacation to the Bahamas. He routinely woke up at 7 a.m. to study for more than two hours.

“It wasn’t as bad as it sounds, because I was outside on a porch and the sun was just coming up,” Butkus said without a trace of irony. “It was really quiet; you get in two hours and it pays off later.”

After two years of juggling a full-time career in risk management at Citigroup and classes at Fordham’s Lincoln Center campus, Butkus is poised to climb the financial career ladder even higher, armed with an M.B.A. that he feels is a prerequisite for upper management positions.

If commuting every day from his Hoboken, N.J., home to work and school wasn’t enough, Butkus is getting married to his longtime girlfriend. But he said that pales in comparison to the responsibilities shouldered by some of his classmates.

“You meet people in different situations all throughout the program,” he said. “There are people having children, getting married or changing jobs. There will be classes with people who have two or three kids. How do they do it? It’s amazing.”

Butkus initially signed up for two graduate business classes at Fordham to continue his education beyond the undergraduate degree in accounting and economics he earned at Muhlenberg College.

“I don’t like to sit still. When I was taking two classes, I still had some free time, and I just love school,” he said. “Fordham has a superior program at an undervalued cost, so at first I took two classes, and then I took three thereafter. That was sort of the gate of no return.”

In a way, it was a natural path for Butkus, whose older brother Sean also earned an M.B.A. and whose parents often worked multiple jobs when he was a child.

“Sometimes you have to put things aside to get ahead in life,” he said. “It’s a competitive environment out there, and people all over the world have more access to jobs and education, so you have to try to remain on top, and look for opportunities, and try to see them before they even reach you.”

In fact, what he values most from his time at Fordham is the ability to examine problems from different angles, thanks to professors and classmates who brought their varying areas of expertise to bear on class discussions and projects.

“What I took away were perspectives from marketing, psychology and many other fields,” he said. “There were people from the Law School taking some classes, so it was good just to sit around and get a discussion going.”