skip to main content
Return to Fordham University
You are at:Home»Inside Fordham»Film Festival to Reel in Crowds with ‘Serious and Provocative’ Movies—and Plenty of Popcorn 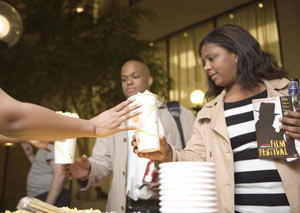 The inaugural Fordham Law Film Festival drew large crowds last year. The second film festival is expected to do the same when it gets underway on Oct. 19.
Photo by Nancy Adler

Fordham Law School’s Forum on Law, Culture & Society will light up the screen on Oct. 19 when it launches the second annual Fordham Law Film Festival, one of its signature events of the year, with a full slate of movies.

The festival features six films that range from the classic (To Kill a Mockingbird) to the lesser known (True Believer) and all deal in one way or another with justice and the law. Screening of the films will be followed by discussions with guests that include Allen Dershowitz, Felix Frankfurter Professor of Law at Harvard University; Cecilia Peck, daughter of actor Gregory Peck; and Adam Liptak, national legal correspondent for the New York Times.

The goal of the festival, said Thane Rosenbaum, John Whelan Distinguished Lecturer in Law and director of the forum, is to offer a “blend between fun and festive and serious and provocative.”

We want to explore what the films mean in a broader cultural sense,” he said. “What does the film teach us about the law, and how does it inform the public about what is valuable or deficient about our legal system? This year, we have gone for topics that show the law both in its glory and in its failure.”

Last year, the inaugural festival drew nearly 1,000 theatergoers to watch films that included 12 Angry Men and The Verdict and guests such as the U.S. Department of Justice’s chief Nazi hunter, Eli Rosenbaum, who participated in a discussion after the screening of Judgment at Nuremberg.

This year’s festival will open with an HBO documentary, Little Rock Central: 50 Years Later, to be screened at the HBO Theater, 1100 Avenue of the Americas. HBO, along with the law firm of Entwistle & Cappucci LLP, are the Forum on Law, Culture & Society’s corporate sponsors. The festival will close with a screening of The People vs. Larry Flynt on Oct. 25 at McNally Amphitheatre on the Lincoln Center campus.

One of the things the festival seeks to do, Rosenbaum said, is to offer a communal experience at a time when many people rent movies and watch them in the isolation of their homes.

“Our film festival goes back to an era when movie theaters in New York City held retrospective films, secondary runs with a thematic showing,” he said. “These don’t exist much anymore. Our festival is unique in that it offers a way for an entire community to come together in conversation, to sit with others who have a connection to the film and hear what they have to say and to comment.

“And we sell popcorn.”

All showings will take place in the McNally Amphitheatre with the exception of opening night. Ticket and schedule information is available on the festival’s