skip to main content
Return to Fordham University
You are at:Home»Inside Fordham»Feinberg Breaks Down TARP Intricacies 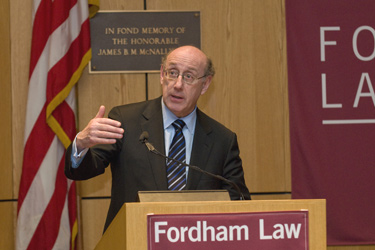 Kenneth R. Feinberg tells the audience that as TARP’s special master for executive compensation, he has no enforcement authority.
Photo by Ben Asen

Kenneth R. Feinberg has mediated some extraordinarily tough disputes. He has been charged with determining the fair market value of the Zapruder film that captured John F. Kennedy’s assassination and has served as the special master of the September 11th Victim Compensation Fund.

Feinberg’s most recent undertaking, he noted at Fordham Law, has been much more limited in scope than some past efforts, but still has generated intense interest. As the special master for executive compensation in the Troubled Asset Relief Program (TARP), he occupies a unique position.

“At a time of great economic uncertainty, populist fervor on Main Street wants to know how much key corporate officials are making when the very survival of those companies depended on the taxpayer. The American people have a right, and they want to know the dollars,” he said.

He also noted that while the Securities and Exchange Commission and Federal Reserve have made public recommendations on the issue of executive pay, their suggestions have been mild.

“As the special master, I actually calculate the liquidated dollars that will go to these executives. That’s very concrete, so there’s a great deal of interest there,” he said.

Feinberg’s talk, “Determining Executive Compensation—Challenges and Pitfalls,” sponsored by Fordham’s Corporate Law Center, was followed by a lengthy question-and-answer session. In it, he explained how he determined the pay for top executives in companies that received TARP funds and spoke frankly about the challenges that await him.

He said at the March 31 event that his job could be compared to that of a bankruptcy judge.

“What’s very unfortunate is this media characterization of me as a pay czar,” he said.

“First of all, my grandmother in Lithuania would be very confused. I’m not a czar. A czar is somebody who imposes imperial edicts on individuals arbitrarily without regard for reaching consensus,” he explained. “I’m a mediator, and I’m trying to develop consensual compensation packages.”

Working first and foremost from the statute that established his office, Feinberg said he and his staff strived to satisfy three requirements:

As proof of their success, he noted that of the individuals who accepted their recommended salaries in 2009, 85 percent are still in their positions.

What will be very interesting, he said, is when the 419 TARP companies provide him with compensation information for their top 25 employees between October 2008, when TARP was announced, and February 2009, when it was implemented.

“I’ll tell you what the problem is. Once I get that information and evaluate it, I have no enforcement authority,” Feinberg said. “I can’t demand that any excessive compensation be repaid. I can’t file a lawsuit on behalf of the American people. I have no enforcement power. All I have is the bully pulpit.

“If we find excessive pay during this window and we think the taxpayer is owed some refund, then we will pressure.”