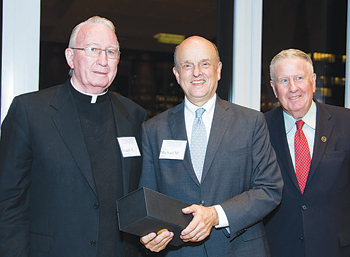 The center presented Father O’Hare with the George J. Mitchell Lifetime Public Service Award. A founding member of the board of advisors of the Feerick Center since its creation in 2006, Father O’Hare was also the longest-serving president in the history of Fordham University (1984-2003), one who strengthened every part of the institution during his tenure.

Earlier in his career Father O’Hare served on the faculty of several educational institutions, and was editor-in-chief of America, the Jesuit weekly magazine of news and opinion. An avid volunteer for civic organizations, he was the founding chairman of New York City’s Campaign Finance Board, where he served for 10 years.

“He has advised, shaped and inspired the work of the center to provide access to justice for New York’s most vulnerable citizens,” said Michael M. Martin, dean of the Law School.