Fordham Law’s Feerick Center for Social Justice celebrated its fifth anniversary on Sept. 26—five years to the day of its launch in 2006. 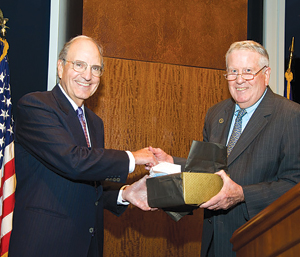 More than 240 alumni and friends attended a reception at the headquarters of Mutual of America, raising almost $400,000 for the center’s initiatives on behalf of poverty and consumer law, pro bono counsel initiatives and other social justice programs.