skip to main content
Return to Fordham University
You are at:Home»Inside Fordham»FCRH Senior Sets Sights on Doctorate in Chemistry

Evan Smoak was seven years old when he learned what a Ph.D. was. 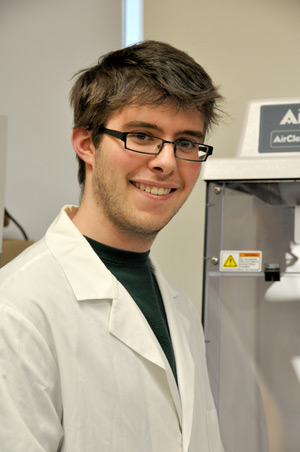 Evan Smoak seeks to create a scientific breakthrough that will benefit humanity.
Photo by Janet Sassi

“I have always been immersed in books,” said Smoak, whose mentor is Ipsita Banerjee, Ph.D., assistant professor of chemistry. “I came home from school one day and told my mother I was going to get a Ph.D. in paleontology because I was, at that point, really interested in dinosaurs. If it took a Ph.D. to find fossils, that’s what I would get.”

By the time Smoak was in junior high, his interest in dinosaurs had shifted to biochemical and molecular biology after a summer camp at the Cold Spring Harbor DNA research facility in Laurel Hollow, N.Y.

But by high school, it was chemistry that caught and held Smoak’s interest.

Today, Smoak is one of a small group of undergraduates to have presented oral research—not once, but twice—at the national meetings of the American Chemical Society. His work in the laboratory under Banerjee has focused on:

• beta-amyloid peptides to help treat Alzheimer’s disease;
• the growth of polymers and metal nanoparticles; and
• new materials for the mitigation of growth of cancer cells.

He has co-authored research articles for at least five scientific publications, including Nanotechnology, Chemical Communications, and The Journal of Applied Polymer Science.

Such accomplishments, however, don’t come without focus.

“I’ve spent almost every free moment over the last three years in the laboratory in John Mulcahy Hall,” said Smoak, who is a graduate of Regis High School in New York City. “Dr. Banerjee and I have been able to do a lot of great work together. She is a fabulous mentor.”

Much of the biochemical research today, said Smoak, targets disease pathologies. For example, how does the cell cycle in cancer work? Or how can laboratories create less-toxic therapeutic agents? These and other questions, he said, become “powerful motivating factors” to do research.

“Research in a laboratory is not what I consider work,” Smoak said. “It becomes the thing that you want to wake up every day and do, because if you work hard enough, you might find something that will benefit the life of every single person on this planet and every generation going forward.”

In the fall, Smoak heads to the University of Pennsylvania to begin a doctorate in the chemistry program, with special emphasis on the interface of bionanotechnology and biomedical science. The course and research requirements at Fordham, Smoak said, really prepared him for this next level of study.

The Department of Chemistry requires its majors to do two years of research with a mentor; Smoak opted for three.

“I am still in contact with seniors who graduated when I was a sophomore just starting in the lab,” he said. “We were a very close-knit community, and we did some very good collaborative work because we all bounced ideas off of each other.”

Thanks to a scholarship from the Office of Prestigious Fellowships, Evan will wrap up his research with Banerjee this summer. Banerjee described Smoak as a true researcher and scientist, and one of the few undergraduates who keeps up with his field of research by reading scientific journals.

“I will really miss him when he graduates, but at the same time it is bittersweet,” Banerjee said. “He will be moving on to bigger and better things.”