Before enrolling at Fordham College of Liberal Studies, Barbara Delo got an education in the vitality that people can maintain in the face of conditions that would seem to be heartbreaking. 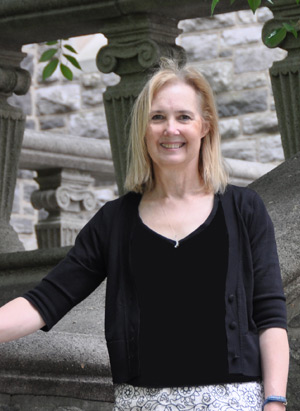 Barbara Delo went back to school over concerns about cost-cutting across the health care industry.
Photo by Chris Gosier

As a registered nurse, she often saw people embrace life in spite of their disabilities, and it changed her. After a while, “you didn’t see the wheelchair,” she said. “You saw the smile, or you saw the face, or you heard what they were saying.”

Through it all, she’ll miss FCLS. “It’s become a second family,” she said.

Delo has long wanted a four-year degree. After earning an associate’s degree in nursing from Rockland Community College in 1983, she worked as a nurse—often part-time—while she and her husband raised a family. Today, they have seven grown children and six grandchildren.

She worked mostly in long-term care, where she learned how disabled people could stay spirited. She saw them overcome their anger at their injuries and regain the will to live. One woman, a quadriplegic, took great pleasure from feeling the sunshine on her face. Delo saw another patient, afflicted with Lou Gehrig’s disease, fiercely resist the idea that his suffering might soon come to an end.

“Don’t ever say that. I want to see my daughter grow up,” were his words, she said.

She said she grew concerned about how this population could be affected by cost-cutting pressures in health care and a growing movement in society toward euthanasia and physician-assisted suicide.

“I decided that I wanted to speak up for the population I worked with,” Delo said. She found Fordham appealing because her son is an alumnus, and because of her Catholic faith.

The preparation she received at FCLS was “wonderful,” she said—because of the supportive professors and administrators, the challenging curriculum, and the student community that welcomed a nontraditional student who was in her 50s. That community includes her daughter, who is studying accounting at night—also at FCLS—while raising two children.

In her three years at Fordham, Delo has gained confidence as a speaker and discovered latent talents. One of them is writing, which she is applying as a reporter for a local newspaper near her hometown of Blauvelt, N.Y.

It was challenging to go back to school later in life, but she attained academic distinction. She made the Dean’s List at FCLS, and in 2008 was inducted into honor societies including Alpha Sigma Lambda, the national honor society for continuing education and lifelong learning.

She emphasizes the variety of help she received from her professors.

“It was a combination of making me work hard and letting me know what my weaknesses are, and always being there to support me as I faced challenges,” she said. “I worked a lot harder than I thought I was going to have to, but I learned so much.”