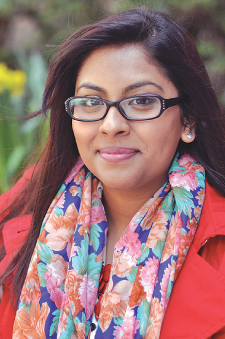 Naadia Chowdrury was no stranger to big city ways when she first committed to staying in New York City for college, having grown up in Richmond Hill, Queens.

But after four years at New York’s prestigious Stuyvesant High School, Chowdrury was looking for an environment that was less competitive and more collaborative.

At Fordham College at Lincoln Center, where she was accepted into the honors program, she found a home, majoring in psychology and minoring in sociology.

“There is competition here, but it’s healthy competition. People support you. In high school, I once asked someone for notes for a class I’d missed and I got partial notes. It was just sort of doing your own thing, because you’re trying to beat out other people for seats for schools,” she said.

“Coming to Fordham, I wasn’t thinking ‘What grade did you get?’ I have my own standards and I’m going to go according to them and go forward.”

As part of her honors program, Chowdrury wrote a senior thesis, under the direction of David S. Glenwick, Ph.D., professor of psychology, on Muslim mothers and their perceptions of child behavior issues. Her hypothesis, which was born out of a survey she conducted, was that many of them conceptualize psychological issues their children may be experiencing as simple development issues.

For the survey, Chowdrury and her team presented a group of Muslim mothers with four fictional vignettes featuring children exhibiting different degrees of shyness and acting out. The team then asked the mothers how serious they thought the problem was and what they would do to respond.

“These women were certainly concerned, but in terms of what they said they would do about it, it was just talk to family and friends, talk to the other parent,” she said, “but not to really go any further.”

Chowdrury has submitted her paper to the Journal of Muslim Mental Health and for admission at psychology conferences on the East Coast.

Commuting from Richmond Hill was a challenge, said Chowdrury, but she was still able to join Desi Chi, a cultural club for South Asian studies, and work as the treasurer for the Jesuit honor society, Alpha Sigma Nu.

Now she’s ready to leave New York City for the first time and pursue a law degree at Duke University, where her goal is to ultimately work on behalf of domestic abuse victims. A class at Fordham on trauma taught her the value of counseling, but she wants to help victims of domestic abuse first get out of the bad situations they’re in—which is what the law can do best.

The prospect of leaving her home and the Northeast is both exhilarating and terrifying, she says. But she’s up for the challenge: Fordham was a challenge when she came here, too.

“The honors program started out very rigorous, and I thought, ‘What is going on, where is my time, maybe this is not the school for me,’” she said.