skip to main content
Return to Fordham University
You are at:Home»Inside Fordham»FCLC Senior to Research Women in Muay Thai 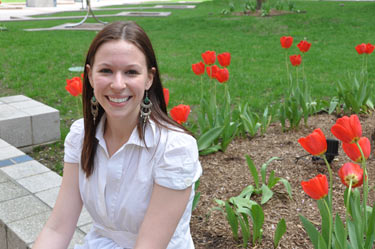 Anne Leiberman will travel to Thailand to examine the social and political contexts of women’s participation in the country’s national sport.
Photo by Gina Vergel

When Anne Leiberman was a child, she studied the Korean martial art of Tang Su Do. Often, she was the only girl in class.

“I got to be a brown belt, but it was always a little awkward because I was teased, and no one wanted to fight me because no one wanted to fight a girl,” said Leiberman, who will earn a bachelor’s degree in African and African-American studies with a minor in women’s studies from Fordham College at Lincoln Center.

The recipient of a prestigious Fulbright Fellowship, Leiberman plans to travel to Thailand in September to research women in Muay Thai boxing. Her martial arts background aside, Leiberman said Fordham’s class on “International Women’s Movements” inspired the project.

“The class opened my mind to seeing that feminism is as multidimensional as people are unique,” she said. “Feminism has many forms.”

Leiberman took an academic interest in Muay Thai after learning that women weren’t allowed to participate in the wildly popular Thai sport until 1995.

“There’s a stigma around women fighting in what is the country’s most popular sport,” she said. “It is very reminiscent of this idea that women are somehow unclean.”

The stigma dates to an urban legend that began in the 1970s. According to the story, on one occasion, a female announcer entered the ring before the first fight. That night, it is said, became the bloodiest in Muay Thai history.

“Men didn’t want to watch women fight or bet on the matches, but it wasn’t because their manhood was threatened,” Lieberman said. “Suddenly that changed.”

Her research will address what happened in Thailand socially and politically that caused the ban against women fighting in Muay Thai to be lifted.

“People promote these women’s fights because now they can make money,” Leiberman said. “It makes me think about the commodification of the female body and what it looks like around the world in this context in Thailand.”

To apply for the Fulbright, Leiberman had to become affiliated with a Thai university. Chulalongkorn University in Bangkok required her to apply to one of its graduate programs.

“Luckily, Muay Thai is such a big part of Thai culture that they found my project really interesting, especially the women’s studies department,” she said.

In addition to interviewing women at a Muay Thai camp, she will train with them.

“I need to be part of the experience so I understand what they are going through,” said Leiberman, who is taking intense Thai language courses. “I’m of the firm belief that wherever you go, you should speak the language because there are so many things that don’t translate cross culturally.”

Leiberman, who holds a 3.7 GPA, was a Schomburg-Mellon Humanities Scholar last summer. She said she owes much of her success to the Fordham faculty, particularly professors in the Department of African and African-American Studies who have inspired her academic career.

“All of these teachers have been instrumental in my development as a person. I wouldn’t have gotten to this point without their support and tremendous guidance,” Leiberman said. “A lot of us bemoan the Fordham core, but had I not taken it, I may not have found room in my schedule to take Prof. [Fawzia] Mustafa’s ‘Harlem Renaissance’ class and I might not be sitting here today. They’ve sharpened my mind so much. I still can’t believe I got a Fulbright. It’s unbelievable to me.”