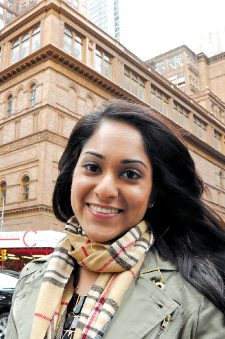 Jaunita John pursued music and political science with equal gusto during her time at Fordham College at Lincoln Center.
Photo by Patrick Verel

When it came time to pick a college to pursue political science and music, she knew Fordham was the place.
“I had been studying music since I was very young, both Indian and Western classical and contemporary music, so I definitely wanted to get a degree in that,” she said.

“I don’t know what I want to do with it later in life. Perhaps go into teaching it at some point? But I definitely wanted that.”

Having been trained in voice since she was a child, John brought her talents in opera, classical music, and jazz as a performer in the Fordham community jazz ensemble, which performs at Jazz at Lincoln Center. Her honors thesis, which she completed under the advisement of Daniel P. Ott, D.M.A., assistant professor of music theory and composition, looked at how people attain a higher state of mind in both Hindu Carnatic music and Indian Syrian Christian chant.

“Syrian Christianity had been established in India for centuries and Carnatic music for many, many centuries as well. Since I grew up in both traditions, I wanted to explore how, through music, people attain transcendence,” she said.

In the winter of 2012, she collaborated with Shankar Tucker, a clarinetist who specializes in Indian classical music/Jazz fusion. Their cover of Nitin Sawhney’s song “Nadia” has been viewed more than 370,000 times since it was posted on Feb. 8, 2012 on YouTube.

Making the video was a way to tap into her Indian roots while also trying something new, as “Nadia” is an example of Hindustani classical music, which is popular in northern India.

Working with Greer to analyze the elections of African-American mayors in the 50 largest cities in the United States in the post-civil rights era was challenging, because it forced her to learn more about topics she was unfamiliar with, like bond ratings.

“I had to go through a lot of census data and resources that I had to find on my own. It was the kind of independent work that really helped hone my research skills,” she said.

That immersion in policy and law convinced John to apply to Yale Law School, which she’ll be attending in the fall. She opted for Yale because of its small class size—one factor that she says made her time at Fordham so enjoyable.

“The Fordham faculty has been amazing. The professors have given me attention as if they were just teaching me alone. I was able to drop in, talk to them about both professional and personal things and get advice. If I needed a recommendation, there was never a moment’s hesitation,” she said.