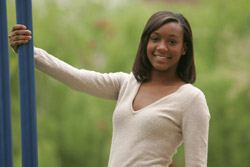 Taeler Cyrus will reinforce her modern dance experience as a member of Ailey II.
Photo by Bruce Gilbert

Taeler Cyrus fell in love with the idea of studying dance in New York when she was 15 years old. But this was no teenage daydream.

As a sophomore in high school, Cyrus, a Los Angeles native, spent two intense weeks training and performing with the New York-based American Dance Festival. The experience put her with college-aged dance students who were living her dream—sharing apartments, riding the subway, spending a grueling amount of time in the studio and performing at venues.

“I knew then I definitely had to study dance in New York,” Cyrus said.

Fast forward six years. Not only has the 21 year old achieved her goal of studying dance in the Big Apple, but the Fordham College at Lincoln Center senior is the only student in her class to be asked to join Ailey II, a modern dance troupe connected to the Alvin Ailey American Dance Theater.

“It was an honor because it’s not something you apply for; they ask you to join,” said Cyrus, who graduates from FCLC with a B.F.A. in dance and a communications minor.

“I hope to gain more performance experience and find out what company life is really like, and to see how I will adapt to traveling and dancing in new surroundings.”

The opportunity to join the company meant turning down a job offer from the Metropolitan Opera in New York because it conflicted with the Ailey II travel schedule.

But it’s surely not the last offer this very determined dancer is likely to get.

Like many professional dancers, Cyrus began dancing as soon as she could walk. At age 11, she even tried another career path, swearing off dance class in favor of art, only to return to dance after she realized she missed it, Cyrus said.

Ever since then, has Cyrus attacked her dance training with a fervor, attending summer intensives, taking classes after school and dancing on the weekends. All the while, her family supported the idea of her pursuing a career in the arts.

“My mother is a big advocate of finding a job you love to do,” Cyrus said.

This doesn’t mean Cyrus is relying solely on her dance skills for her future. In fact, having a back-up plan is precisely why she chose to attend Fordham.

“I’m very interested in public relations,” she said. “It’s possibly something I’ll pursue in the future, but for now my focus is on dance.”

Students who get into the highly competitive Ailey/Fordham B.F.A. program go through up to 17 dance classes a week plus three academic classes. The dance curriculum includes daily ballet classes, as well as jazz and West African dance.

Cyrus’ favorite form of dance is modern, which she’ll revel in as part of Ailey II.

“It gives room for more creativity in terms of movement and expression,” she said. “I also love that it can be interpreted by everybody differently.”

While she’ll enjoy touring the United States with Ailey II, Cyrus said she will miss rehearsing with her dance classmates, taking Fordham classes and going to the studio at the Ailey School.

This summer, she plans to teach dance to youngsters on the weekends.

“I hope to teach dance competition choreography because competing was a huge part of my life when I was young,” Cyrus said.