skip to main content
Return to Fordham University
You are at:Home»Fordham Magazine»Alumni News»FCLC Alumni Return for Reunion, with New Building as Backdrop 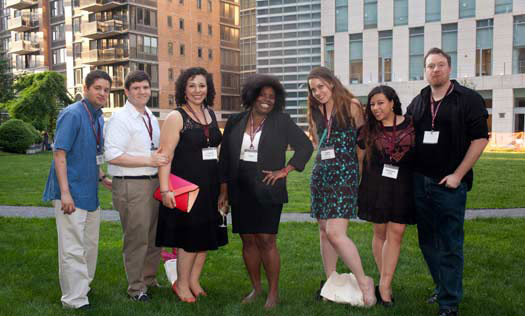 FCLC Reunion attendees pose against a backdrop of the newest addition to Fordham: the Law School building. (Photo by Jill LeVine)

The annual reunion for Fordham College at Lincoln Center took place June 6 against a backdrop that signified the restless growth of the college over the past century: a new 22-story campus building that is on the cusp of opening to students.

“There’s so much happening, there’s so much excitement on this campus, and a large part of that excitement you can see if you just turn around,” said Robert R. Grimes, S.J., dean of the college, in remarks to alumni at Robert Moses Plaza, across from the new building.

The new structure, including undergraduate housing and a new facility for Fordham Law School, was one of several achievements that Father Grimes described at the event—blessed with balmy weather—that drew more than 550 alumni and guests to the Lincoln Center campus.

“There are so many things to be proud of at Fordham College at Lincoln Center,” Father Grimes said, including students’ prestigious fellowship awards, the mock trial team’s strong performance in regional competition, and “award after award” won by the college’s student newspaper, The Observer.

Two members of the college’s board of advisors presented Joseph M. McShane, S.J., president of Fordham, with a $1.65 million check representing this year’s alumni donations.

“I want to thank you for coming home. It is always a great grace and an honor to have you back,” Father McShane told the alumni.

The new structure was particularly impressive to alumni who hadn’t visited for a few years.

“Seeing the new building is incredible,” said Justin Brennan, FCLC ’01, a communications consultant in Washington, D.C., who was glad to see the project maintained the campus’s green space. His classmate Joel Johnstone, FCLC ’01, said “it’s a little surreal” to see the change.

“I just can’t believe the progress they’ve made with the campus,” said Johnstone, an actor who will play astronaut Gus Grissom in the ABC series Astronaut Wives Club.

Among the alumni was Beatrice Jane Maher, UGE ’45, who remembered the college’s more modest quarters at the Woolworth Building and at 302 Broadway, two places where Fordham made its home in Manhattan before moving to Lincoln Center in 1968.

She belonged to a close-knit class of 35 students, all female. “I loved it. I really did,” she said. “My mother, God bless her, she chose the college. She said, ‘You’re going to Fordham, and that’s it.’”

The reunion included a few enrichment events. George Drance, S.J., artist in residence in the theatre department, performed part of his new one-person show, *mark, which presents the Gospel of Mark through the eyes of a street artist.

“Friendship thrives in the city,” since population density brings people into contact with more acquaintances, he said. While people in rural areas tend to care about each other more than they do in cities, he said, New York has moved more in that direction since the Sept. 11 attacks, becoming friendlier.