skip to main content
Return to Fordham University
You are at:Home»Inside Fordham»FCLC Alumni at Home in Heart of the City

Whether it had been decades or just a year since they were last on campus, the Fordham College at Lincoln Center (FCLC) alumni who reunited on June 14 found a different Fordham from the one they had left.

“A lot has been going on,” Robert Grimes, S.J., dean of FCLC, told the nearly 600 alumni from the classes of 1969 through 2013 at the annual FCLC reunion.
Their alma mater now boasts two new academic majors—integrated neuroscience and environmental studies—as well as a now-flourishing music major, and will soon have its new Fordham School of Law building and undergraduate residence hall up and running.

“We hope and expect that next year at the reunion we’re going to be offering you tours of that building,” Father Grimes said.

This year, alumni had two new events to attend. The fourth installment of Fordham at the Forefront, sponsored by the Office of Alumni Relations, kicked off the evening’s events.

“The goal of this initiative is to demonstrate Fordham’s leadership in areas that are of importance and concern, highlight our best and brightest faculty, and deliver a measure of lifelong learning to our alumni base,” said Michael Griffin, assistant vice president for alumni relations.

The event featured Christiana Peppard, Ph.D., assistant professor of theology, science, and ethics, who presented, “Water: Oil in the 21st Century,” a discussion of the global fresh water crisis.

Peppard, who recently spoke on a two-part series on TED-Ed, an extension of the popular TED talks, told the alumni gathered in the 12th-Floor Lounge/Corrigan Conference Center that although oil seems to be the most vital resource of the 21st century, the availability of fresh water is in fact an equally—if not more—urgent matter. 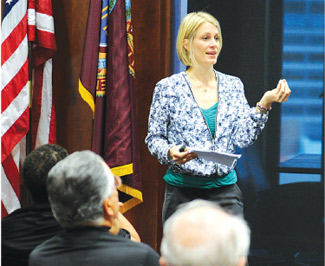 “Fresh water is essential for us, and there is no substitute,” Peppard said. “But our current rates of demand and extraction exceed our supply.”

In spite of how blue our planet appears from space, it has a deceptively small amount of potable water, she said, because 97.5 percent of the earth’s water is seawater. Freshwater accounts for a mere 2.5 percent, and, of this, 70 percent is locked in glacial forms. The remainder is groundwater, which comes in the form of surface water and aquifers, or deep, underground caverns of water.

Industry has begun tapping aquifers; much of the agriculture of the Great Plains relies on water from these sources. However, once water is drained from an aquifer, it cannot be replaced—meaning that relying on this source of fresh water is utterly unsustainable.
“Aquifers have been referred to as ‘fossil water,’ because once you use them, you lose them,” Peppard said.

She warned that unless we get serious about topics such as aquifer depletion and global climate change, and embark on water-saving strategies such as desalination and water conservation, the world could face a global water crisis.

As the alumni in the audience tackled these implications during a spirited Q&A, other alumni traded water for wine downstairs in the Pope Auditorium with Holly-Anne Ruggiero, FCLC ’03. Ruggiero, the artistic director of imPULSE Theatre, presented Wine Lovers: The Wine Tasting Musical, a hybrid between a wine-tasting and a musical comedy.

Later, alumni gathered on the plaza for hors d’oeuvres and dancing. Delia Peters, FCLC ’85, chair of the FCLC Board of Advisors, and Rocco Andriola, FCLC ’79, co-chair of Excelsior | Ever Upward | The Campaign for Fordham for FCLC, presented the alumni class gift to Father Grimes.

This year, their gift totaled $2.7 million, thanks to generous gifts from two prominent alumni, including a $500,000 gift to rename the Center Art Gallery.

The rest of the evening brought time to reminisce.

“It feels weird to be back,” said Emily Krzan, FCLC ’08, who was celebrating her five-year reunion. “I remember standing by those doors after my parents had just dropped me off, and now it’s done.”

Many returning alumni were struck by the sight of the rising building and other new structures on campus.

“When I was here, there weren’t even computers in the library,” said Margitta Rose, FCLC ’87.
For others, feelings of nostalgia ran parallel to feelings of pride.

“My dream was to graduate from Fordham,” said Florette Vassall, FCLC ’98. “So being back here is a dream come true.” 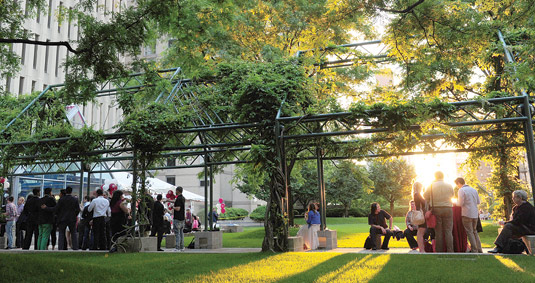