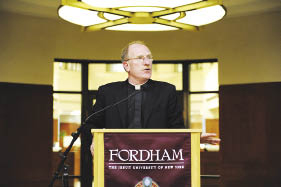 Joseph M. McShane, S.J., president of Fordham, has been named chair of the Commission on Independent Colleges and Universities (CICU), a statewide association representing the public policy interests of the chief executives of more than 100 independent colleges and universities in New York state.

Father McShane was first elected to the CICU Board of Trustees in June of 2005, and has also served as its vice chair. His term as chair will run from 2012-2014.

“I welcome the chance to work with CICU’s president, Laura Anglin, and my colleagues in private higher education, to advance the interests of our collective student body,” said Father McShane. “The private colleges and universities of New York play a crucial role in ensuring both access to, and affordability of, higher education in the state. Given that the member institutions of CICU are among the main providers of intellectual capital in the state—both through their many graduates and the research they produce—I am honored to do whatever I may to advance CICU’s mission.”

Although not a government agency, CICU is an educational corporation formed under the New York State Board of Regents. Its mission is to develop consensus among a diverse membership and to advance higher education public policy. The commission is governed by a board of trustees composed of chief executive officers or institutional trustees of member campuses who represent the diversity of the CICU membership in terms of institutional type, size, and geographic location.