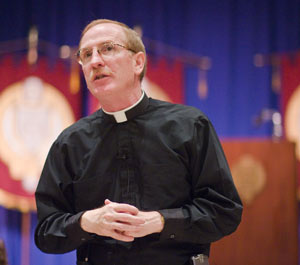 Joseph M. McShane, S.J., president of Fordham, discusses the University’s various initiatives during his State of the University address..
Photo by Ryan Brenizer

Delivering the annual State of the University address on Sept. 10, Joseph M. McShane, S.J., president of Fordham, told a gathering of faculty and administrators that the University made impressive gains in the past fiscal year and is flourishing.

Speaking at Pope Auditorium on the Lincoln Center campus during the annual Faculty Convocation, Father McShane described the University as brimming with intellectual vitality and well on its way to building a national reputation, while highlighting milestone achievements in areas ranging from admissions to fund raising.

He said that the University ended its fiscal year on June 30 in a “better than budget position,” or a financial surplus with investments surpassing the $500-million mark, an all-time high for Fordham.

“I am happy to say that the financial health of the University is quite strong,” Father McShane said. “The totals represent an increase of $111 million over the $402 million we had on the same day last year. We achieved a 19 percent return on our investments.”

During his hourlong presentation, Father McShane touted how well Fordham fared in a spate of recent rankings, citing particularly the University’s rise to 67th place in the 2008 edition of U.S. News & World Report’s “America’s Best Colleges” ratings. He also said that the Fordham School of Law continued to fare well in the rankings, breaking into the top 25 law schools in U.S. News’ graduate school rankings—an accolade, he said, it richly deserves.

And he called attention to the College of Business Administration (CBA), which climbed 14 places inBusinessWeek magazine’s annual ranking of undergraduate programs, to 34th nationally.

Father McShane also lauded the “remarkable year” for Fordham on the admissions front. He told the gathering that during the 2006-2007 admissions cycle, Fordham received 21,955 applications to the traditional-age undergraduate colleges, a 21 percent increase over the previous year and an all-time record for the University.

Of those applicants, the University admitted 9,233, he said, decreasing the University’s acceptance rate to a new low of 42 percent. He also said several markers of academic quality of had risen with incoming class, namely a 28-point jump in SAT scores to 1,230.

“Everything points to a class of great quality,” Father McShane said. “In addition, we have enrolled 51 international students in the freshman class, up from 36 last year. Our students are coming from a wider area, and they are enriching us with their diverse backgrounds.”

In the area of fund raising, Father McShane reported that the University raised $49.4 million. He said that the total number of donors to the University crossed the 19,000 mark during the 2007 fiscal year, an 18 percent increase from the previous year.

Meanwhile, the undergraduate participation rate, the number of alumni with undergraduate degrees from Fordham making gifts to the University, reached 22 percent, up from 20 percent a year ago.

Father McShane also said that the University’s annual Founder’s Dinner raised $2.3 million and Jubilee Weekend, an alumni reunion held every June on both campuses, drew more than 1,400 people and raised $12.6 million for the University.

Among notable gifts made to the University over the past fiscal year that Father McShane highlighted was a $5 million donation from E. Gerald Corrigan (GSAS ’65, GSAS ’71) to fund an endowed professorship and support existing scholarship funds, and a $1.7-million gift from the Jesuit community at Fordham.

Although the University is in sound financial and academic shape, Father McShane said “in the coming years, we will have to marshal our resources very carefully because we will face challenges.”

One key challenge, he said, is financing major construction projects on both the Lincoln Center and the Rose Hill campuses. “These projects will tax us,” he said, “but they must be undertaken to secure the intellectual strength that is the heart of the University.”

Among the goals Father McShane has set for the upcoming year is to increase both fund raising and alumni participation. 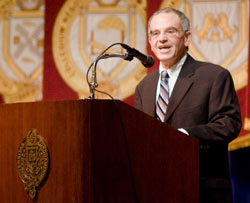 Among those who were introduced at Fordham’s annual Faculty Convocation was Stephen Freedman, Ph.D., the University’s new senior vice president for academic affairs and chief academic officer.
Photo by Ryan Brenizer

“Some people say, ‘You should not even be talking about money,’” he said. “For me, money makes the dreams of our students come true. Fordham proudly serves first-generation students. We sit in the immigrant heart of the nation. Money makes service possible and makes greater service a reality.”

Father McShane also focused on accomplishments of the faculty and the University’s various schools. He said that funded research reached $14.7 million in fiscal 2007, an eight percent increase over the year before. Multiple-year research funding also increased nearly five percent, to nearly $32 million.

• Faculty members in the arts and sciences published 70 books and 340 articles, sponsored 93 conferences and made nearly 500 scholarly presentations.

• The Graduate School of Business Administration (GBA) developed a new master’s degree in quantitative finance and its Beijing International MBA program was selected as one of the “most valuable” business degree programs in China by Forbes magazine.

• The College of Business Administration experienced a 37 percent increase in undergraduate applications and the SAT scores of the entering class rose by 50 points.

• The Graduate School of Religion and Religious Education received state approval to offer a doctorate ministry program and made plans to move into distance learning. Faculty members published six books and 22 articles.

• The Graduate School of Education organized five conferences, including collaborating on “A Path to Love” with UNESCO to explore the complexity of global education, and rose 30 places in the U.S. News rankings.

• The Graduate School of Social Service, which celebrated its 90th anniversary, is ranked 14th in the nation by U.S. News. Faculty members published six books and 45 articles.

• Fordham Law School celebrated its centennial and its ranking in U.S. News increased to 25th in nation, its highest rating ever. Faculty membes published 10 books and 135 articles.

• Fordham College of Liberal Studies’ Reading Enrichment and College at 60 programs experienced increases in their enrollments.