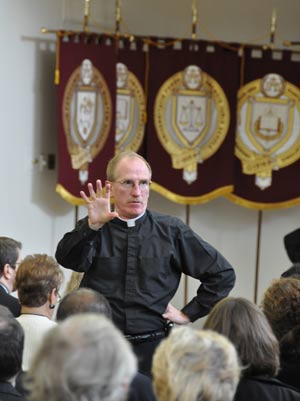 Joseph M. McShane, S.J., president of Fordham, announces a 6.5 percent increase in fundraising in Fiscal Year 2009, with the University raising a total of $71.9 million.
Photo by Patrick Verel

Father McShane cautioned, however, that endowment losses and a lackluster economic recovery, in the midst of the implementation of Fordham’s strategic plan, made the year “one of the most challenging” in the University’s recent history, and that more hurdles are ahead.

He said that the University would continue Excelsior | Ever Upward | The Campaign for Fordham, with its ambitious goal of raising $500 million. But it would revisit Toward 2016, the University’s strategic plan, to measure its strengths and weaknesses and to update it accordingly.

“Economic downturns are always bad for universities,” Father McShane told 300 faculty members who gathered for his address on the State of the University. “The one we have just experienced and that we are still in is especially challenging for Fordham.

“In spite of the challenges we face, the state of the University remains strong because of your generosity of spirit and your devotion to Fordham,” he said. “But we are a chastened community.

“I am deeply aware of the degree that [the downturn]has affected every member of the University family,” he continued. “I wish I could say to you that the coming years were going to be easy . . . the truth is no one knows what the state of the economy is going to be like.”

One great challenge will be to carry on the University’s mission of helping need-based students, Father McShane said. Currently 89 percent of Fordham’s Class of 2013 receives financial aid. The 2009 discount rate among incoming freshmen was 40 percent, up from 35 percent last year. The class, Father McShane said, was the “most talented class in our history,” with the highest SAT average at 1240 and containing a record 88 National Merit-level scholars.

It will be a challenge, said the president, to maintain such selective undergraduate enrollment as the potential student population declines in the Northeastern states—by far the largest demographic pool at Fordham. Although this year brought a new record in applications at 24,445 (3 percent higher than 2008), it ultimately produced a lower yield than last year, with 1,774 first-time freshmen compared to last year’s 1,839.

Finally, the University will have to work hard to maintain enrollment numbers at its professional schools, Father McShane said, in the face of a decreased demand for training in certain disciplines.

“In the coming years, the University will have to be especially vigilant as it tries to balance its desire for increased visibility with its need to remain financially sound,” he said.

On a very positive note, Father McShane announced a 6.5 percent increase in fundraising in Fiscal Year 2009, with the University raising a total of $71.9 million. That total, he said, included 18 gifts from benefactors giving $1 million gifts or more. So far, the University’s capital campaign has raised $282 million and is more than halfway toward its $500 million goal.

The University also ended its fiscal year on June 30 in a “better than budget” position, with $4 million going into a “quasi” endowment to be used toward student financial aid commitments.

Fordham held onto its 61st place ranking among America’s colleges and universities in U.S. News and World Report, sharing the position with Clemson, Texas A&M, Purdue and the University of Minnesota.

Students earned an astounding number of prestigious scholarships: out of 192 students who applied for various awards, 153 received them. The winnings included a record 14 Fulbright awards, one Udall scholarship, seven National Science Foundation research scholarships and a stack of prestigious government-funded fellowships. The year yielded one Rhodes finalist and one Marshall finalist as well.

Faculty applied for a record 198 grants and received more than $13 million in new funding, up 47 percent from 2008.

Among the individual schools’ achievements are:

• Both schools of business administration, CBA and GBA, received strong re-accreditation from the Association to Advance Collegiate Schools of Business. GBA’s EMBA program was ranked 25th in the world by The Wall Street Journal and its part-time MBA program ranked 30th in the nation by U.S. News and World Report. Faculty published eight books, 15 book chapters and 48 articles.

• The Graduate School of Education was named Teach for America’s major partner in preparing its 2009-2010 cohort. Faculty published 21 books and chapters and 17 articles.

• The Graduate School of Social Service was ranked the 18th best school of social service or social work in the nation by U.S. News and World Report. Faculty published 10 books and chapters and 25 articles.