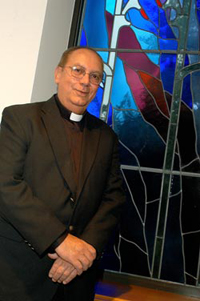 Vincent Duminuco, S.J., had been the rector of Spellman Hall since 2001.
Photo by Ken Levinson

The rector oversees the emotional, spiritual and physical well-being of the approximately 25 Jesuit faculty members and administrators who live in Spellman Hall on the Rose Hill campus and manages the operating budget for the facility.

“I am deeply grateful to Father Duminuco for his service as rector,” said Joseph M. McShane, S.J., president of Fordham University. “He brought to the post an encyclopedic knowledge of Jesuit education, a passionate devotion to Fordham and a wonderfully pastoral concern for all of the members of the Fordham Jesuit community.”

Father Cecero, who began his three-year term as rector on July 1, joined the Fordham faculty as an assistant professor of psychology in 1998. He is a licensed clinical psychologist and the director of Fordham’s Center for Spirituality and Mental Health. Father Cecero became a member of the Society of Jesus in 1976 and was ordained in 1989.

Father McShane called him a “creative and engaging member of the psychology department and a widely recognized expert on religious life and pastoral counseling.”

Father Cecero said that he is looks forward to serving his fellow Fordham Jesuits in the years ahead.

“I am honored,” he said, “to be in this position of serving the Jesuit community and promoting the Ignatian vision of education at Fordham.”

Father Duminuco, who joined the Society of Jesus in 1951, will spend the 2007-2008 academic year on sabbatical in private reflection at Santa Clara University in California, and as a visiting professor at Gonzaga University’s Florence, Italy, campus. He will retain his position as secretary of the Fordham Board of Trustees. He has been a trustee since 2002, and he intends to resume teaching at Fordham in the 2008-2009 academic year.

Father Duminuco has long ties to Fordham. A graduate of Fordham Preparatory School, he graduated from Fordham in 1957 and the Graduate School of Education in 1960. He went on to earn his Ph.D. from Stanford University in 1969. Father Duminuco, who began his teaching career at Fordham in 1970 as an adjunct associate professor at GSE, has been director of the Joseph O’Hare Jesuit Teacher Leadership Program since 2003.

“There is a real brotherhood within this community and God has blessed us,” Father Duminuco said. “Being here has been a most consoling experience.”

The Superior General of the Society of Jesus appoints all rectors. According to church law, rectors serve for three years and can be appointed to one additional term for a total of six years of service.