Daniel Berrigan, S.J., on stage at the University Church.
Photo by Chris Taggart

When Joseph McShane, S.J., president of Fordham University, commissioned Daniel Berrigan, S.J., to write about the three founders of the Jesuit Order, he asked for three poems—one on St. Ignatius Loyola, one on Francis Xavier and one on Peter Faber. Sensing a unique opportunity, Father Berrigan asked to shape the work into a performance piece, and Father McShane readily accepted.

The result was “Ordina questo amore, O tu che m’ami: Recitative With Four Voices: Ignatius, Francis Xavier, Peter Faber and Chorus,” which had its premiere on Dec. 10 at the University Church on the Rose Hill campus. The dramatic reading was directed by George Drance, S.J, artist-in-residence in the Department of Theatre and Visual Arts, performed by University students and featured an original musical score written by Elizabeth Swados, a five-time Tony Award nominee. An enthusiastic audience gave Father Berrigan, a dedicated peace activist, and University poet-in-residence, a standing ovation.

“Father Berrigan is the most accomplished Jesuit poet of our time, and everyone who was here had a sense that we had a historic moment,” said Father McShane. “I am confident that the piece will be one of the most important cultural artifacts to have been prepared for the [Jubilee] celebration.”

The performance poem recalls the genesis of the Society of Jesus, which was founded in 1541 by the three religious figures and which was celebrated in 2006, the Jesuit Jubilee Year. The three men faced skepticism, suspicion and persecution by the theologians of the day, eventually triumphing in their mission to form the Jesuits. In drawing from the tradition of the Greek classics, the poem enlisted a trio of women to portray Father Berrigan’s “chorus,” a voice that both compliments and counterbalances the dramatic transformations of the three main voices—Inigo (Jacob Martin), Francis Xavier (Ian Quinlan) and Pedro (Vincent Wagner).

“I wanted a feminine counter—a brake—to these three powerful men,” said Father Berrigan, “I wanted someone to show some skepticism—as the three women do—before embracing the trio’s beliefs.”

In directing, Father Drance said he conceived of the chorus as a bridge between centuries, a body whose self-discovery mirrors that of the founding Jesuits. The chorus consists of three contemporary students (Jessica DiGiovanni, Amber Hurst-Martin and Jayne Deely) who are college roommates (the founding Jesuits, “Inigo,” “Xavier” and “Pedro” were also roommates at the University of Paris). The women encounter the faith of the Jesuits for the first time in their studies, and, at first, don’t quite get it. They embody three voices: one that questions, one that mocks and one that affirms the teachings of the impassioned young men. At one point, they hastily scribble “I © Inigo,” “I © Pedro” on a blackboard, echoing their skepticism, irreverence and lack of faith. 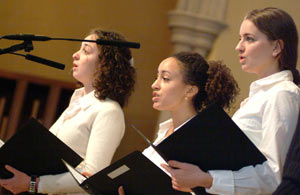 “Their contemporary sensibility doesn’t understand the kenotic aspect of the vows that these three men took,” Father Drance said. (Kensois is the concept of self-emptying of one’s will and becoming fully receptive to God’s will.)

The Recitative also places special emphasis on the character of Pedro—Peter Faber—whose personal journey as a Jesuit was marked with self-doubt. Faber was the only one of the three men not canonized.

“Peter Faber lives in the shadow of the others,” Father Berrigan said. “He was not a mystic, he was a gentle man in the background, who spoke openly of his own sense of being below the heroic par. That was very affecting to me.”

“These men are… weren’t always welcomed,” Father Drance said. “We [the Jesuit order]were suspect, we were accused, we were maligned. We tried to echo in the sounds what goes on in a person full of self-doubt, coming from these kinds of experiences.”

The Recitative describes the genesis of the Order as “this trio, rhythm of life sprung free, intricate, brute beauty and valor and act . . . this godlike glance.” “Capturing the dramatic moment of the Society’s creation, Father Berrigan said, was “very specific, and dramatic, and personal to me.”

“They were heroic. There are heroic people today, too, all over the map, keeping things from being even more lethal and more final,” Father Berrigan said. “These three men recognized there is a bridge between the love of one another and God’s love for us, that asks for no separation. As we are loved, so let us love one another.” 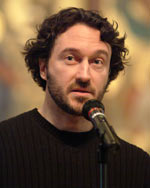 George Drance, S.J., directed and performed in Father Berrigan’s dramatic historical poem commemorating the 500th year of the founding of the Society of Jesus.
Photo by Chris Taggart

Recitative With Four Voices will be performed again on the Lincoln Center campus on Feb. 1. Plans are underway for Fordham University Press to publish the poem.
J
oan L. Roccasalvo, C.S.J., adjunct associate professor of theology at Fordham, has written a series of essays in celebration of the Jesuit Jubilee, available at FORDHAM magazine online:
www.fordham.edu/ignatianjubilee