skip to main content
Return to Fordham University
You are at:Home»Inside Fordham»Fairs Showcase Range and Depth of Undergraduate Research Interests

Fordham’s undergraduate colleges put forth their best research projects in three separate research fairs on April 9 and 10 at the Rose Hill and Lincoln Center campuses.

Gabelli School
At the Gabelli School of Business, seniors Erika Loberg and Cara Luke surveyed 200 people to illuminate consumers’ attitudes about online privacy in “Online Privacy and Consumer Attitudes.” They found that about 75 percent had concerns about hacking and identity theft, government spying, spam, or personal information being sold to third parties.

Yet 40 percent said tailored advertisements improve their online experience, not understanding that websites track their personal preferences in order to provide these ads.

“People are not sure what they think about (online privacy) because they don’t want their information collected, but they do want to have a personalized experience,” Luke said. (Faculty Mentors: Aditya Saharia and Mohammed Nejad.)

Robert Dallas, also a senior, examined whether pleasant music would boost consumers’ opinions of companies’ brands. For “More than Just Noise: Background Music and its Effect on Consumer-Brand Relationships,” he surveyed 200 people online, using a format designed to control for whether they already identified strongly with the brands being studied.

Music had no statistically significant effect, but Dallas gained ideas for future research that would reflect additional nuances, such as consumers’ existing positive feelings about a brand. People who identify with a brand may not necessarily have positive feelings about it, like someone who frequents a coffee shop that serves terrible coffee simply because it’s conveniently located.

In a way, consumers’ brand relationships are like relationships with other people, he said—“They’re not so black and white.” (Faculty mentor: Yuliya Komarova.)

Gabelli seniors Samantha Timmerman and Jennifer Whitford studied what social media users think of sponsored posts or advertisements that show up in their news feeds alongside posts from their friends.

In “User Perceptions of Sponsored Posts on Social Media,” they found that as long as the ad was seen as entertaining, informative, useful, and valuable, people thought well of it, no matter which social media site they saw it on. The sites examined were Facebook, Twitter, Instagram, Pinterest, Tumblr, and FourSquare. (Faculty mentor: Luke Kachersky.)

“The posts’ characteristics and the content, that’s what dictates the perception by the users,” Whitford said.

“You can post to any social media platform and expect a similar result, as long as the ad is engaging.”

Fordham College at Rose Hill
Since 2012, undergraduate research participation has increased 17 percent. The Fordham College at Rose Hill undergraduate symposium began with a scientific focus, but it now encompasses almost all of the college’s disciplines. As a result, students who had never encountered each other gained new perspectives, like seniors Rachael Presner, an English major, and Caitlin Ramiro in theology.

They found common ground in how St. Paul influenced both ancient and modern communities. Ramiro pegged her talk to Paul’s role in the religious debate of sexual ethics, as it relates to condemning prostitution. As prostitutes did not have legal protection of their bodies, one shouldn’t read Paul’s condemnation literally—since the perpetrators were not even in control of their own fate.

Presner said Ramiro’s presentation reminded her of the evangelical community that she was raised in. For evangelicals, Paul’s writings wield profound influence in matters of sexuality, though their interpretations are rather straightforward.

“One of the things I enjoyed about Caitlin’s talk was that she was taking this interpretation of Paul out of the box to look at it, and when she looked at the prostitutes she put their female identity back in,” she said. 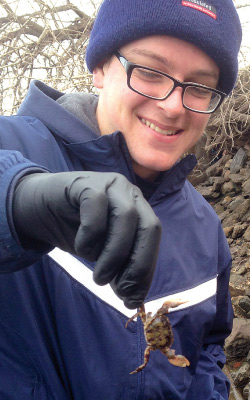 The team found crabs, mussels, and oysters, but striped killifish were found in the most polluted areas. Mussels and oysters are known for helping mitigate pollution, but the killifish’s consumption of sewer waste in the canal may only help with visual clarity.

“It would take a lot more killifish before it would reduce the amount of decaying organic matter,” said Hayes. (Faculty mentor: Jason Munshi-South.)

For “Toys as a Means of Wealth Display,” sophomore Sarah Carr worked at the Busy Bee Toys store in Doylestown, Pennsylvania. The anthropology/classical civilizations major observed how customers would go out of their way to ask that the store affix a “Busy Bee” sticker to their purchases.

“We had customers pull up Amazon.com in the store and say, ‘Oh, look, but I can get this toy for this price,’’” she said.

“But they’d still end up buying the toy, so when it got wrapped and stickered, they could say they supported a local business, [and]it cost more.” (Faculty mentor: Aseel Sawalha.)

Candice Shacklette, a senior communications and visual arts major, shared pictures she took with a large-format camera during a two-week trip to Las Vegas in June to document the neighborhoods away from the Vegas strip hit hard by the 2008 financial crisis.

The goal of “Gambler’s Conceit: The Old New West” was to follow up “The New West,” Robert Adams’ 1974 exploration of raw western landscapes being transformed into suburbs.
“Something that [investors]have done in New York that was unwise and a little bit of a gamblers’ conceit ended up destroying things very far away that they can’t even imagine,” she said.(Faculty mentor: Joe Lawton.)

At the White Box theater, Winnie Berger, a senior theology and dance major, performed the first of a five-part dance that she choreographed about her relationship with her four-year-old sister Violet, who lives in Arizona and was recently diagnosed with autism.

Each piece in the dance represents a different theme that Berger imagines is going through Violet’s mind, from frustration and curiosity to recognition and joy.

“We have a really great time when we’re together, but I’m really separate from her, so I feel isolated,” she said. “What better way to express how much I love and care about her than art?” (Faculty mentor:Karina Hogan.)