Fordham recognized its own for excellence in teaching on Feb. 1 at the 21st annual Arts and Sciences Faculty day, held at the Lincoln Center campus. 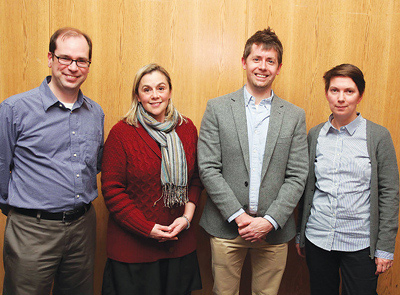 From left to right, Johnson, Labonte, Dunning, and Finnemann.
Photo by Michael Dames

Larry Stempel, Ph.D., professor of music, was the event’s featured speaker. In his lecture, “What Is/n’t a Broadway Composer? The Case of Richard Rodgers,” Stempel, author of Showtime: A History of the Broadway Musical Theater (W.W. Norton, 2010), presented his research on the role that Rodgers played in composing some of Broadway’s best-known show tunes.

Stempel approached Rodgers from a music historian’s perspective informed by first-person interviews, analysis of original composition notes, and placement of the subject within historical context.

He placed Rodgers among contemporaries that included Frankfort School philosopher Theodor Adorno and set out to frame not just the nature of Rodgers’ art, but also the nature of Broadway composers more generally.

Adorno felt that certain composers (Kurt Weill, for one) lost sight of what it means to be a composer through an association with the commercial venue of Broadway. The very notion of a composer, said Stempel, grew out of the 18th-century court musicians who struck out on their own as artists. By the end of the 19th century the Romantic notion of the composer as an autonomous artist had fully evolved.

On Broadway, however, a composer is hardly autonomous, said Stempel, but works with orchestrators, musical editors, conductors, vocal arrangers, and many more in a collaborative effort.

In the context of Adorno’s claim that Weill had abandoned the true composer’s ideal, Stempel said that Rodgers’ true talent lay in his tuneful songwriting rather than his composing.
Stempel gave as an example an early version of the song “Oklahoma” as presented in an out-of-town performance in New Haven, Conn. At the time the show was called Away We Go and was in desperate need of a showstopper.

Stempel said that the original “Oklahoma” composition shows Hammerstein’s lyric inserted into Rodgers’ chorus music, syllable-to-note. The song’s harmonies were altered during production, however, by musical arranger Robert Russell Bennett who was summoned by Rodgers himself. The new version of “Oklahoma” was so good that the show’s name was changed to bear its title, Stempel said.

“The song took on new heft,” said Stempel. “From a cultural perspective it [was]transformed into something more like an anthem… as the chorus now strove vocally to embody, in sound, certain tropes in the mythology of the American frontier.”

One risks settling for a more limited understanding of the song’s “cultural moment” without taking Bennett’s arrangement into account, said Stempel. But practically speaking, Bennett’s work gave the show its much-needed commercial appeal.