skip to main content
Return to Fordham University
You are at:Home»Inside Fordham»Faculty Reads»Professors’ Book Assays the Films of Krzysztof Kieślowski 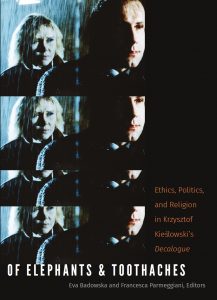 No one attending expected the intellectual exercise to become a book, but now it has.

Of Elephants and Toothaches: Ethics, Politics, and Religion in Krzysztof Kieślowski’s ‘Decalogue’ (Fordham University Press, 2016), a collection of essays on the director’s work, was co-edited by two of that seminar’s attendees: Eva Badowska, Ph.D., dean of the Graduate School of Arts and Sciences, and Francesca Parmeggiani, Ph.D., an associate professor of Italian and comparative literature.

The book release coincided with the re-release by the Criterion Collection of Kieślowski’s Decalogue, a 10-part series of short films initially created for television. Each of the 10 segments is loosely based on one of the Ten Commandments, said Badowska, who remembers seeing the initial release of the series on television in her native Poland in 1988.

“I never expected this would become a scholarly project,” she said. “I have a very visceral relationship to these films.”

Badowska said that while Kieślowski intended the series to transcend its particular time and place, it could not divorce itself from its historical setting completely. The language and visuals place it distinctively in Poland in the late 1980s. This tension between universal themes and visual and linguistic specificity gave rise to the unique title of the book.

Kieślowski once said that his films were as universal as a toothache: It doesn’t matter where you’re from; the pain is the same. He argued that the themes of the Decalogue are ones that anyone could relate to: jealousy, love, hate, and joy.

But Kieślowski also once spoke of a somewhat dubious childhood memory: seeing an elephant loose on the streets of Kraków. The image is as distinct to a time and place as it is odd, said Badowska, and “instantiates the haptic cinematography and belief in the concretizing power of the image in Kieślowski’s films.” She cited a scene in which a dying man lay in his hospital bed, focusing on a leak in the ceiling. The leak and its accompanying “drip, drip, drip” place the viewer in a structure that is representative of the crumbling infrastructure of Communist Poland in the late 1980s.

“His intention was to talk about universal and ethical dilemmas, but the film technique makes the dilemmas palpable, almost hyperreal, with a hypermaterialistic approach,” she said. “It’s not just any water dripping,” Badowska, a scholar of language and literature, co-wrote with Parmeggiani in the introduction to the book.

The professors have each written a chapter on a particular episode. Parmeggiani’s chapter is titled “Decalogue Seven: A Tale of Love, Failing Words, and Moving Images.” Badowska’s chapter focuses on Decalogue Six, which loosely examines the commandment “You shall not commit adultery.”

In Decalogue Six, a young man spies on and eventually falls in love with an older female lover. Badowska notes that the woman addresses her young lover in the familiar second-person singular, “you,” while he addresses her in the third-person singular “Pani,” or madam. When he says, “I love you,” the film’s subtitle reads as “I love Madam.”

Badowska said that such a subtitle misses the nuance of the exchange, as do many of the subtitles.

For Badowska, it is the specificity and nuance found in the Polish dialogue, which is missing in the English subtitles, that supports the stronger argument—that his work is of a particular time and place, rather than of universal intent. It’s a language that Badowska understands as intimately as she does English. For all of the Decalogue’s universality, the film remains intimately tied to Poland in the late 1980s.