skip to main content
Return to Fordham University
You are at:Home»Inside Fordham»Faculty Reads»Poisonous Tale Reveals Tawdry Underbelly of Colonial Newport
Elaine Forman Crane’s new book tells the tale of young wife seeking to become a merry widow. (Photo by Tom Stoelker)
Set within colonial Newport, The Poison Plot (Cornell University Press, 2018), a new book by Elaine Forman Crane, Ph.D., professor emeritus of history, tells the story of Benedict Arnold and his wife Mary, who, at nearly 20 years his junior, attempted to poison her husband and position herself as a wealthy widow in the bustling port city. Benedict, grandfather of the famous traitor and grandson of a former Rhode Island governor, came from a high-profile family, thereby making his divorce petition from his treacherous wife the local scandal of the winter of 1738 and 1739. 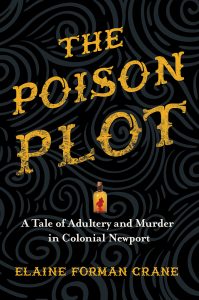 What attracted you to this tale from the 18th century underbelly?

It’s not underbelly so much. The Poison Plot evolved from my last book, Witches, Wife Beaters, and Whores, which told six different stories from the same period. It’s always the material that attracts me. One book leads to the next, and while researching Witches, I found this extraordinary collection of papers at the Rhode Island State Archives about Benedict Arnold and his wife Mary, and it just made for a great story.  Only after it was published did I realize what The Poison Plot was really about. It is an indictment of the blossoming consumerism of the 1730’s, although that was not my intention when I began research.

It’s one of the five major cities of Colonial America, so it’s really just as much an 18th century town, plus they never tore down the houses. As Boston and Philadelphia grew  they tore some of the colonial buildings down. And you know, it just has everything. It has theater, it has a harbor, it has shopping. Newport is so much like New York.

And you write that was always the case, even in the 18th century.

Yes. They had had shows coming in from London, books, pamphlets, and British ideas. The Atlantic crossing took six weeks usually, so letters went back and forth all the time from families that were separated by the ocean. And newspapers kept them up to date, incorporating news from Paris and as far as India. In the book, the last chapter raises a question—again something that only came to me as I was writing: How did this imported culture that surrounded Mary affect her actions toward her husband? In other words, poison was, metaphorically speaking, in the air—especially in transatlantic literature. All these things would’ve had an influence on the characters in the book. 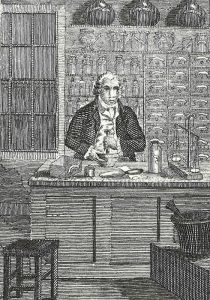 Apothecaries hawking illicit wares were a part of the colorfully corrupt Newport.

Yes, and what I found surprising was how comfortable early Americans were with illicit affairs. It didn’t seem to bother them that somebody’s husband was with somebody else’s wife. And that was a little surprising, because when they do come down on it, they would  prosecute people for adultery.

If it was so common and accepted, why prosecute?

Because maybe there are too many sordid relationships. It just may be that they wanted to set an example. Do they ever say this? No, of course not. But that’s what it looks like to me sometimes. It was a part of governing. For early Americans, and even in the mainstream America today, heterosexual monogamous relationships are assumed to be the way life should be. And it’s taken us a very long time to accept anything but that.

Why do you think we haven’t heard many of these tawdry tales from the period?

Because historians are conditioned to provide a past that brings us to a great present. Of course, it’s not quite a great present–politically speaking. At least in my mind, it’s not.

Benedict was a wealthy man and Mary liked to spend his money. What are the contemporary parallels between of such consumerism and corruption?

I don’t think that has changed. I think America evolves. I think if you look back at the 18th century, you see aspects that you’re going to see again in the 19th century, and that evolves into the 20th and then the 21st century. We are who we are.

In many ways, we’re still the children of England. I believe that, and I think that’s a good thing. We have our common law from England, our language. There’s a lot of English about us. There are a lot of differences too, of course. Our diversity is more pronounced, which makes us an even more interesting people.