skip to main content
Return to Fordham University
You are at:Home»Arts and Culture»Parroting Art
Christopher GoGwilt in Central Park with a pair of starlings (Photo by Tom Stoelker)
A new book of essays published by Fordham University Press titled Mocking Bird Technologies: The Poetics of Parroting, Mimicry, and Other Starling Tropes, examines the role that starlings, parrots, and other mockingbirds play in literature, both as motifs and as metaphors. Fordham Professor of English Christopher GoGwilt, Ph.D., edited the book with Melanie D. Holm, Ph.D., assistant professor of English at Indiana University of Pennsylvania.

Are you a bird watcher?

I wouldn’t style myself a bird-watcher, but I am fascinated—actually I’m a bit obsessed—with one particular bird: the starling. 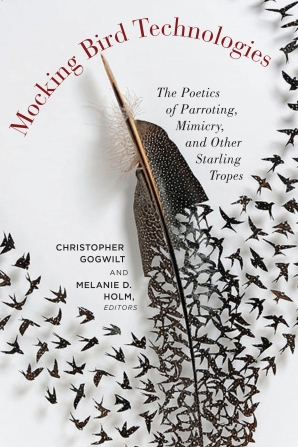 What intrigues you about them?

They’re pretty much the common birds that you see all around the city, iridescent with speckles. But they’re not natural to the Americas. In the late 19th century, a man called Eugene Schieffelin took it as his project to populate the United States with all the birds in Shakespeare. In the early 1890s he released two flocks of European starlings in Central Park and now you find them all across North America. Starlings, like parrots, can be trained to talk; but in the wild they imitate whatever sounds are going on in the environment and use the bits and pieces of what they hear to make up parts of their song.

You may think you’re hearing the squeaking wheel of a cab, but it might well be a starling in a tree or on a lamppost.

How did the book come about?

Professor Holm and I put together a seminar on the topic of bird mimicry for the American Comparative Literature Association. Many of the people who have essays in this volume were part of that seminar. One of the fun discoveries for me was how deep and wide the historical scope of the pairing of parrot and starling is in literature.

Besides being a trope, how else do mockingbirds relate to literature?

The person who has written the coda for this book, Sarah Kay (professor of French literature at New York University) focuses on medieval lyric and is an expert on troubadour poets. She’s written about two sides of troubadour poetry – the parrot’s way and the nightingale’s way. The parrot evokes parody, imitation, plagiarism, while the nightingale is associated with lyric originality. Kay argues that the troubadours made use of both mimicry and originality.

The troubadour is a rather Eurocentric figure. Is mimicry universal in art?

Our pairing of parrot and starling opens the whole question of bird mimicry to an even broader comparative and global perspective, reaching back to Sanskrit and Chinese literature. The Chinese novel, Dream of the Red Chamber (one of China’s four great original novels) features a parrot and a starling (or crested mynah). As with other traditions, birds are associated with the making of poetry, but also with the quoting of poetry, the parroting of poetry. In Sanskrit traditions, going back even further historically, you have parrots and starlings often linked together, and that’s the template for the book.

If everything is parroted, where’s the art? Is anything original?

Art usually requires both original creation and copying — like the starling, stealing bits from elsewhere.

No, modernist art just returns to the terms of ancient questions about originality— explicitly so in the canonical American and British modernists, like Pound, Eliot, and Joyce. The break may create fragments, but they are still fragments of tradition. A collage, or mocking bird technology.