After the 2008 world financial crisis, newsrooms across America began to lay off news staff in droves. Various sections and bureaus of newspapers soon faded as advertising revenues shrank in the digital age.

At the same time, the decline in newspaper readership started to accelerate, said Beth Knobel, Ph.D., associate chair for undergraduates at the Rose Hill campus and a professor in the Department of Communication and Media Studies.

“I kept asking myself, what is this going to mean in terms of what newspapers were going to be able to do?” said Knobel, an Emmy Award-winning journalist who has worked for CBS News, The Los Angeles Times, and The New York Times. 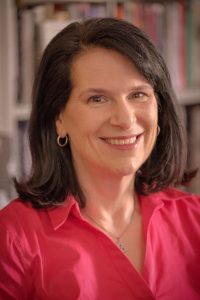 “When I started working on this research project in 2011, I actually thought that I was going to be chronicling the death of watchdog and investigative reporting,” she said.  “It seemed logical to think that the watchdog function was fading away because newspapers had gotten smaller.”

For her new book, The Watchdog Still Barks: How Accountability Reporting Evolved for the Digital Age (Fordham University Press, 2018), Knobel assessed the front pages of nine American newspapers around the country, of varying sizes.  Included in her study were large papers like The New York Times, metropolitan dailies like the ones in in Minneapolis and Denver, and small papers like the one in Lewiston, Idaho. She aimed to chart how investigative or “watchdog” reporting has evolved since 1991, as the Internet transformed communications.

“Much to my surprise, I found that when I actually looked at the front pages, which would be the place that you would most likely see a big watchdog or investigative piece, the amount of accountability reports went up over time,” she said. “In the 2011 sample, there were actually more deep watchdog stories being done at these papers—more than ever before.”

Knobel spoke with current or former editors of all the newspaper studied, including the Washington Post, Atlanta Journal-Constitution, and Albany Times Union. She learned that investigative reporting, which informs the public of falsehoods, wrongdoing, corruption, fraud and other offenses, remained a high-priority because the editors felt it was in the public interest. 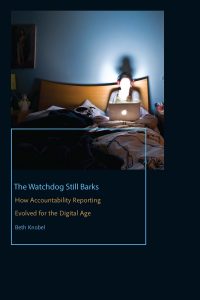 The Watchdog Still Barks, a new book by Fordham professor Beth Knobel examines how investigative reporting has evolved in the digital age.

“Newspapers do the job of trying to hold government accountable,” she said.  “That’s why they were enshrined in the Bill of Rights as a critical institution for our country.”

Among the newspapers that have championed watchdog reporting over the years is the Wall Street Journal, she said, citing a 2001 investigative report and lab study the paper did that exposed misleading GMO-free labels on foods.

“This was the kind of story that served public policy well and suggested that companies were not being truthful with consumers,” she said. “But that was an expensive story that took months to do.”

“The profile of the Atlanta Journal-Constitution has grown dramatically because it now focuses so much on accountability journalism,” said Knobel.

“Just trying to decide what to cover with a newspaper’s limited resources is always a challenge,” said Knobel. “The government is so huge now that it’s impossible to cover it all. One of the things that I found from my research is that there are vast parts of government that are getting very little attention, like the judiciary and intelligence sectors.”

In recent months, she said, the free press has been disparaged by President Donald Trump—yet it remains vigilant.

“Just because the press is being criticized by the president and the administration, doesn’t mean that it’s not doing its job,” she said. “This book only proves that. The watchdog function is alive and well.”