“He discovered that after just four years words that he used were being used differently, in particular the word culture,” explained Glenn Hendler, Ph.D., associate professor and chair of the English department. “People were using the word in a way that wasn’t about high culture, hierarchy and things like that.” 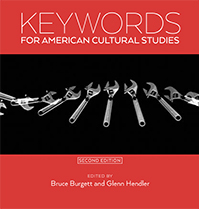 Initially intended as an addendum to his 1958 book, Williams would go on to write 153 essays on other terms related to culture and called the book Keywords: A Vocabulary of Culture and Society.

Flash forward to the Modern Language Association’s 2003 convention held in San Diego. In the spirit of William’s book, Hendler organized a couple of panels around keywords where each panelist spoke for seven minutes on a single word.  An editor from NYU Press approached him afterward and proposed turning the discussions into a book. Together with his colleague Bruce Bergett, Hendler matched dozens of scholars with a word associated to their expertise. The result was Keywords for American Cultural Studies.

“Ours was a collective and collaborative project with different scholars. In some ways it’s more focused than Williams in that this was keywords in a field—American Culture Studies. It was meant to help students understand the debates behind the keywords they’re reading in class.”

To that end Hendler and Burgett have added an additional 30 scholars to the original 60 for a brand new edition that incorporates interactive components on the web. A total of 94 essays by major figures in American, cultural, and ethnic studies focus on a single term that is contested, debated, or complicated.

“These are not standard definitions, they all have arguments to them,” said Hendler. “We didn’t want it to be a standard reference book that would sit on the shelf and be referred to in a stable way. We wanted students to be engaged in the debates themselves.”

More than 30 of the terms are available online where students can engage with the text via a wiki called the Keywords Collaboratory. College classes from across the nation have already used the wiki since, with students working on the same word together at the same time.

“The way keywords are used now as compared to when Raymond Williams is very different,” said Hendler. “The Oxford English Dictionary says that a keyword is a word serving as a key to decipher a code of particular importance or a form of metadata.”

“In a way, with this new edition we’re doing both,” said Hendler.