In her latest book, America as Seen on TV: How Television Shapes Immigrant Expectations around the Globe (New York University Press, 2018), Clara Rodríguez, Ph.D., professor of sociology, examines the “soft power” of American television in projecting U.S.-centric views of social relationships around the globe. She analyzes the strong influences it exercises on young Americans and recent immigrants. 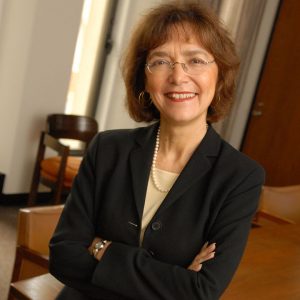 For her research, Rodriguez conducted two studies. One study focused on 71 immigrant adults over 18 who had watched American TV in their home country and had lived in the United States for six years or less. The second sampling was an electronic survey of 171 American-born undergraduates from the United States’ Northeast region.

For the foreign nationals living on American soil, the America they recalled seeing on TV in their home countries differed greatly from the one they encountered on arrival, said Rodríguez. For example, the nation proved more racially and economically diverse than the mostly white, middle class depictions of American life that they had seen back home on TV.

However, for the home-grown audience things were different. “American millennials had a fairly high degree of awareness that [their]TV doesn’t reflect the diversity of the country,” she said. “After all, they had lived their whole lives in the United States and could see the difference between what was portrayed on TV and what they experienced in real life.”

In addition, the two groups differed in how American TV influenced their views in other areas. For example, anti-smoking ads on U.S. TV seemed to have influenced the U.S. millennials to see smoking more negatively.

TV: As Influential as Ever

Rodríguez said that despite young people’s growing preference for viewing TV shows on computers and mobile devices, content produced by the major TV networks is still being consumed by young people both in the U.S. and around the world; it is just accessed differently.  Also, studies continue to show that, with regard to race, class, and gender patterns, the content in both traditional TV and newer mediums, such as Netflix, has not changed significantly.

She added that the two studies gave a “great deal of insight into how U.S. television content exerts a strong influence”–even though many believe that no one watches TV any more. “Television still garners the greatest number of eyeballs, even though the average show’s viewership is down from 20 million to about to 11 million viewers,” she said. Even though the average is down, however, certain events continue to draw a great many viewers. “The last 60 Minutes show featuring Stormy Daniels netted 22 million viewers,” said Rodriguez.

Rodríguez said the first sample provided fascinating insights into what people take away from watching American TV in their home countries, particularly as it relates to social norms.  One subtle example deals with open-concept kitchens and the islands around which men and women eat, cook dinner, and discuss the day’s events. We take the design and practice for granted today, while, in other countries, seeing both men and women in the same cooking/preparation space would have been eye-opening and a violation of traditional gender and class norms.

Ripped from the Headlines

“In another example, a foreign-born respondent said ‘I remember when I saw the first gay character; it really made me think differently about gay people,’” Rodríguez recalled. “Research show[s]that television has had a great influence on how viewers perceive the roles of women and men.”

In addition, she noted that “ripped from the headlines” TV, a genre begun with shows like Law and Order, continues to exert influence on contemporary events in a subtle manner. She cited recent episodes of Madame Secretary and Designated Survivor as shows that are delivering news analysis–albeit with creative license–though entertainment.

Despite the tendency of many to dismiss the medium of TV today, it continues to have an impact on not just Americans, but viewers all over the globe, said Rodriguez.

“Do you think that Donald Trump would have been elected if he hadn’t had his earlier television career, or that we’d be considering Oprah for president?”