skip to main content
Return to Fordham University
You are at:Home»Faculty Profiles»Exploring the Shapes of Spaces and Spaces of Shapes 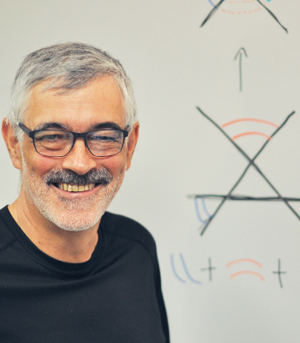 Donut, bagel, pretzel. Different flavors or different shapes? Now imagine trying to describe those shapes without using words like “round” or “cylindrical,” but with mathematical equations.

That’s the bread and butter of Ian Morrison, Ph.D., professor of mathematics. Morrison uses algebraic geometry not only to describe the shapes of objects, but also to track variations of those shapes, like a donut being inflated into a bagel. These variations of shapes themselves form a space called the moduli space of the objects.

This year Morrison oversaw the completion of the three-volume, 1,800-page Handbook of Moduli (International Press, 2013), which he co-edited with Gavril Farkas, Ph.D., professor of mathematics at Humboldt University in Berlin.

The book’s goal was to provide an overview of the subject of moduli, especially by popularizing many topics that were previously only accessible to a few specialists.

“In any area, there’s a small group of experts,” Morrison said. “They talk to each other at a lot of conferences, and they learn lots of ways of visualizing the subject—kinds of folk knowledge—that aren’t in any of the journal articles. Our goal was to reveal these motivations and secret handshakes to a more general audience.”

“So when we invited people to write for the handbook, we said, ‘What we want you to do is to explain things in ways that are not found in the literature, in an informal style that you couldn’t use in a journal, but that would help someone to start working in, or learn more about, your subject.’”

The handbook also honors the work of David Mumford, who was Morrison’s thesis advisor at Harvard University, and of Eckhard Viehweg, a great German geometer. Mumford won the prestigious Fields Medal in 1974, but eventually left algebraic geometry to study computer vision. Viehweg, winner of the Leibniz Prize, Germany’s highest scientific honor, in 2003, was at the peak of his career when he died suddenly in 2010. “There’s a tradition [among mathematicians]that, when people near retirement, we hold a conference and publish a volume of papers dedicated to them,” Morrison said. “That never happened for Mumford or Viehweg.”

Morrison quoted Carl Friedrich Gauss, the 19th century German mathematician considered the greatest of all time, who once declared, “When kings build roads, carters will have work.’’

“Mumford and Viehweg were two kings. The fact that we could put together an 1,800-page collection of papers on this subject is a reflection of how their work opened new areas of research for many other mathematicians.”

Assembling the handbook required not only recruiting almost 50 mathematicians as contributors, but also finding another 35 to referee the submissions. “When I’m given a large paper to referee, it might take me a total of a week to two weeks of serious work to understand and check all the details. This is now almost unheard of in other sciences, but an amazing number of mathematicians continue this tradition,” he said.

“If we didn’t, the subject couldn’t continue, because mathematics continually builds on its past. I quote your theorem and I use it to prove my theorem. If your proof is incorrect, then my theorem has not been proved. So the policing of the subject by the whole community is vital to its continuation.”

Morrison’s current research dwells on questions about moduli spaces that come from birational geometry, an area that asks when superficially different objects share fundamental characteristics. For instance, a cylindrical tube and a rectangle look rather different: one is curved and the other flat. But cut the tube along its length and unroll it and you get a rectangle. Birational geometry tries to reveal such hidden relations.

He’s just finished a paper with David Swinarski, Ph.D., assistant professor of mathematics at Fordham, that picks up on a talk delivered last fall by Newcastle University professor Jordan Stoyanov, Ph.D., to the Fordham math club.

“Jordan was discussing some questions about dice and probabilities with students. We thought one of the questions that he asked could be asked in a better way, so that anyone could understand it,” Morrison said. “And our paper, ‘Can you play a fair game of craps with a loaded pair of dice?’, explores many surprising ramifications.”

In 2014, Morrison will be using a faculty fellowship to organize a series of workshops on the birational geometry of moduli spaces at the new Vietnam Institute for Advanced Study of Mathematics research institute in Hanoi. After the workshops end, he will travel to lecture at the Istanbul Mathematical Sciences Center. Ultimately, he hopes to use such visits to awaken interest in algebraic geometry in the developing world.

“These are countries that are producing excellent young mathematicians but where there are few teachers of algebraic geometry. Algebraic geometry in the 21st century will need all the talent we can develop, because, as in every area of science, the more problems we resolve, the more interesting new questions we learn how to ask but not to answer.’’