skip to main content
Return to Fordham University
You are at:Home»Inside Fordham»Experts Reflect on Kennedy’s Enduring Contributions to America 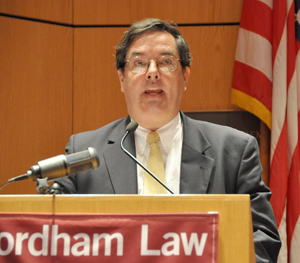 In his book, Thomas Maier (FCRH ’78) examined how the Kennedys’ experience with immigration informed their public and private lives.
Photo by Joseph McLaughlin

Though John F. Kennedy spent a short time as president, his actions continue to have a lasting impact on the United States.

So said a panel of three Kennedy experts who spoke on April 13 at “Kennedy: 50 Years Later,” the annual Russo Family Lecture.

“Immigration was the one issue on which he seemed to feel the strongest,” Maier said.

Maier referenced A Nation of Immigrants, a book Kennedy wrote in 1958 while still a senator. In it, he outlined his idea that immigration was central to the renewal of the American Dream. Kennedy began codifying those ideas in 1963 by proposing changes to the United States’ immigration laws. Those changes were passed after his death as the 1965 Immigration Act.

“There was very little hint of the impact this act would have on America,” Maier said. “It ended the old national-origins immigration system that favored Northern Europeans while severely restricting the entry of newcomers from Latin America, South America and many other places.

“Under this new statute, immigration status was decided without regard for race, ethnicity or national origins,” he said. “Its emphasis was on family reunification.”

That Kennedy was an intelligent, handsome and well-spoken Harvard graduate made him acceptable to many in America’s Protestant establishment, even though his ethnicity and religion played a large role in his life.

“As The Times of London described him at the time, Kennedy was the first member of a minority group to be elected president of the United States,” said Terry Golway, director of the Kean Center for American History at Kean University and author of several books on Kennedy.

Golway played a selection of Kennedy’s speeches for the audience to support his view that Kennedy’s vision of what the country could be—expressed through a stunning gift for oratory—was his most lasting achievement.

Speaking in the divided city of Berlin, Kennedy railed against Communism in one of his greatest public addresses, which he ended by saying in German, “I am a Berliner.”

“The interesting thing is that 15 years before, American bombers had reduced Berlin to rubble,” Golway said. “Now here was the American president telling these Berliners that they were the guardians of freedom and liberty.

Stephen Schlesinger, a fellow at the Century Foundation whose father wrote the first definitive history of the Kennedy administration—A Thousand Days (Houghton Mifflin, 1965)—cited the president’s willingness to talk peace with the Soviet Union as his greatest legacy.

“In 1962, he faced down the Soviet Union in the Cuban Missile Crisis and came out of it a victor in ways that nobody could have anticipated,” Schlesinger said. “That opened the door for him to pursue the first negotiations between America and the West and the Communist empire about arms control.”

Those talks led to the Limited Test Ban Treaty of 1963, which many historians believe was the biggest breakthrough in U.S.-Soviet relations, as it gave future presidents the ability to negotiate with the U.S.S.R. without losing face.

“That was the first time we ever grappled with the idea that we could make a deal with the Soviets that would spiral down the arms race,” Schlesinger said.

He also noted that had Kennedy not been assassinated, he very likely would have withdrawn U.S. forces from Vietnam. Schlesinger pointed out that, unlike his successor, Lyndon Johnson, Kennedy had visited Vietnam and understood that the uprising in that country was not a purely Communist one. Therefore, it needed a unique approach.

Moreover, Schlesinger read from his father’s book about Kennedy’s reluctance to increase the American military presence. “It’s like taking a drink,” Kennedy was quoted as saying. “The effect wears off and then you have to take another.”

Finally, Schlesinger put forth the idea that since Kennedy had won during the Cuban Missile Crisis, he had already proven himself as an anti-Communist, and did not need Vietnam to make that case.

The 13th annual Russo Family Lecture was sponsored by the Archbishop Hughes Institute at Fordham.