skip to main content
Return to Fordham University
You are at:Home»Inside Fordham»Experts Debate Pros and Cons of ‘Faithful Citizenship’ 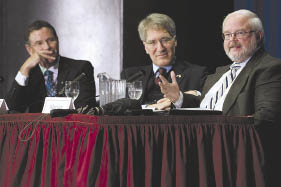 John Carr tells the audience that faithful Catholics can be members of either political party.
Photo by Leo Sorel

Since 1976, a guiding document published by America’s bishops has helped church members base their
political decisions in church teachings.

Its latest iteration, called Forming Consciences for Faithful Citizenship, was the topic of a panel discussion on Sept. 6 sponsored by the Fordham Center on Religion and Culture.

From the outset, the panel members put forth the idea that Catholics were not tied to a particular political party.

“We can divide up the work in our church, but we should not be dividing our community of faith,” said John Carr, executive director of the Department of Justice, Peace and Human Development in the United States Conference of Catholic Bishops.

Carr grew up in Minnesota with a mother who was Republican and father who was a Democrat. “I learned at an early age that we can act on our faith—we can express our principles—both in different ways and in different parties,” he said.

Over the last 35 years, the bishops have published the document eight times, with each new version coming before a presidential election. Each successive edition relies on the same Catholic principles but presents them in ever more refined ways.

Though some people think Forming Consciences is meant only to tell Catholics how and for whom to vote, the panelists said that was not the case.

“It has never claimed to tell Catholics how to vote and it is not a commentary on a particular election—simply because it is not the church’s responsibility to make its teachings prevail in political life,” Carr said.

“Rather, the church wishes to help form consciences in political life and to stimulate greater insight into the authentic requirements of justice,” he explained.

Robert George, the McCormick Professor of Jurisprudence and director of the James Madison Program in American Ideals and Institutions at Princeton, was a staunch Democrat growing up but eventually became a Republican because of the abortion issue.

“The party that I now belong to needs more of a dose of Catholic social thought just as the Democratic Party needs a very heavy dose of the pro-life, pro-family message of the Catholic tradition,” George said.

He compared the call of the church—for a person’s political engagement to be an expression of his or her deepest values—with the ideas of John Rawls, who created the foundation of liberal political thought.

“Rawls held that we should not bring our deepest values into the public square. We should refrain from bringing to bear what he called our ‘comprehensive views’—our visions of human nature—and instead emphasize what he called ‘public reasons,’ that is, reasons not connected or dependent on our deepest views,” George said.

“I think the Catholic tradition is right about this and Rawls is wrong.”

Catholics should involve themselves politically, according to Forming Consciences, because politics is a social good and participation in public life is a moral obligation.

Stephen Schneck, director of the Institute for Policy Research and Catholic Studies at the Catholic University of America, praised the document for this very reason.

“The public order is presented as a natural good ordained by God, that it is morally directed to promote, care for and respect all aspects of citizens’ lives,” Schneck said.