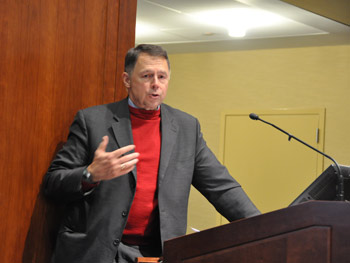 Richard Jones of the International Energy Agency tells the audience that 1.3 billion people worldwide will lack access to electricity in 2030, compared to the 1.5 billion today.
Photo by Gina Vergel

For the first time in nearly three decades, global energy use has decreased, mainly due to the worldwide financial crisis, the deputy executive director of the International Energy Agency (IEA) said on Nov. 30 at Fordham University.

“But with current energy policies, it will quickly resume its long-term trend once the global economy recovers,” said Ambassador Richard H. Jones, a former American diplomat with a wide range of energy policy experience.

Jones gave an overview of forecasts provided in the 2009 World Energy Outlook (WEO), which contains medium- to long-term energy projections and analysis.

It is produced by the economic analysis division of the IEA, an intergovernmental agency that advises 28 member countries on ensuring reliable, affordable and clean energy.

Since the release of the WEO on Nov. 10, Jones has traveled internationally on behalf of the Paris-based agency to discuss its findings. His visit to Fordham was part of the Global Energy Outlook Forum sponsored by the Graduate School of Business Administration and the Business Council for International Understanding.

The WEO presents two scenarios. The reference scenario “provides a baseline picture of how global energy markets would evolve if governments make no changes to their existing policies and measures.”

In what is described as a 450 scenario, however, the report “depicts a world in which collective policy action is taken to limit the long-term concentration of greenhouse gases in the atmosphere,” he said.

“This is the scenario which, according to the intergovernmental panel of climate change, will limit global warming to about 2 degrees centigrade,” Jones said, adding the WEO provides both caution and grounds for optimism.

“Caution, because a continuation of current trends put the world on track for a rise in temperature of up to 6 degrees centigrade and poses serious threats to global energy security,” he said. “Optimism, because there are cost-effective solutions to avoid severe climate change while enhancing energy security.”

Among the findings in the WEO are predictions that fossil fuels will continue to dominate the energy mix, accounting for more than 75 percent of incremental demand. China and India, countries that are not members of the Organization for Economic Cooperation and Development (OECD), will account for more than 90 percent of this increase.

The reference scenario projections imply a persistently high level of spending on oil and gas imports by almost all importing countries.

“China will overtake the U.S. after 2025, to become the world’s biggest spender on oil and gas, while India will surpass Japan after 2020 to take third place,” Jones said.

Also projected in the reference scenario, 1.3 billion people will lack access to electricity in 2030, compared to the 1.5 billion today.

Containing climate change is possible, but would require a transformation of the energy sector, Jones said.