skip to main content
Return to Fordham University
You are at:Home»Inside Fordham»Experts Argue for More Context in Study of Irish America 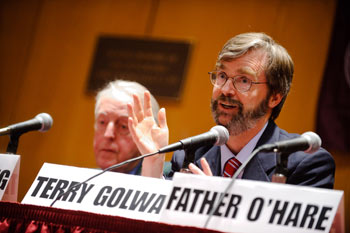 Terry Golway (right) says that Irish America’s connection to Ireland had dissipated by the 1970s.
Photo by Ryan Brenizer

The relationship between Ireland and the United States is far more complex than is typically portrayed, according to a panel of experts on Irish America who spoke on April 15 at Fordham.

The great failure of Irish American history, they said, was that scholars do not look to the homeland to explain how Irish immigrants built their diasporic communities in the United States.

“It is impossible to look at some of these Irish American institutions that we take for granted—politics, the church, the community, the parish—and see them not just in an American perspective, but in an Atlantic perspective,” said Terry Golway, director of the Kean Center for American History at Kean University and author of The Irish in America (Hyperion, 1997).

“When you read conventional histories of the Irish American political machine, it’s as though this immigrant group arrives in New York, Boston, Baltimore and Philadelphia, and like magic, it takes over these cities,” Golway said. “Something was brought on those boats across the ocean.”

He noted that Famine immigrants—those who left Ireland during the 1840s and 1850s—were well versed in the political movement led by Irish statesman Daniel O’Connell to repeal England’s Act of Union over Ireland. The repeal effort, which Golway called the first great mass social movement in modern European history, was organized in much the same way that Tammany Hall and other political machines would be organized in urban America.

Golway was joined by two other noted voices on Irish America—author and historian Thomas Fleming (FCRH ’50), and journalist and author Ray O’Hanlon—at the event, which was sponsored by the Fordham College Alumni Association. The trio recently collaborated on a book, Irish American Chronicle (Publications International, 2009). Over two hours, they examined the linkages and cross-pollination that has occurred between Ireland and the United States over the past 170 years.

Despite the mass emigration from Ireland that occurred well into the 20th century, those who arrived seldom instilled a sense of Irish culture in their children, said Fleming, author of Mysteries of My Father (Wiley, 2005).

“Growing up in the 1930s and 1940s, there was absolutely no interest whatsoever in Irish culture,” he said. “I never knew there was such a thing as step dancing. I knew about Gaelic football, but I never knew a single human being who ever saw a game, much less played it. Even my grandparents—they never said one word to me about Ireland. Never.”

Fleming attributed this disconnect, in part, to the disappointment felt by Irish immigrants over the Irish Civil War, which occurred when a faction of the IRA refused to accept the treaty that was part of gaining independence from England. Irish Americans were overwhelmingly in favor of the treaty, he said, and embarrassed by the bloodshed of Irishmen killing Irishmen that occurred in its wake.

Speaking from the audience, oral historian Miriam Nyhan from New York University gave her take on why Irish immigrants of this period left their culture in the homeland.

Though many scholars were writing the epitaph of Irish America by the mid-1960s, two factors gave it renewed vitality in the last half of the 20th century, according to the panelists.

The strife in Northern Ireland captured international headlines in the 1970s and 1980s, and resulted in many Irish Americans reconnecting with their heritage. Moreover, an influx of illegal Irish immigrants in the 1980s, chronicled by O’Hanlon in his book The New Irish Americans (Roberts Rinehart Publishers, 1998), led to an explosion of Irish culture into the American mainstream in the 1990s.

Looking toward the future, O’Hanlon wondered if Irish America could sustain itself without constantly being refreshed by a new pool of immigrants from across the Atlantic.

“I think this would have been a particularly dangerous situation a couple of hundred years ago, but then I look around and realize that Irish America has its own life now. It generates and regenerates itself,” O’Hanlon said. “It has always impressed me how Irish America hangs on to every detail, and if it hasn’t got the detail, it will go back and find it.”