skip to main content
Return to Fordham University
You are at:Home»Inside Fordham»Expert Shows Why Beauty Is in the Mind of the Beholder 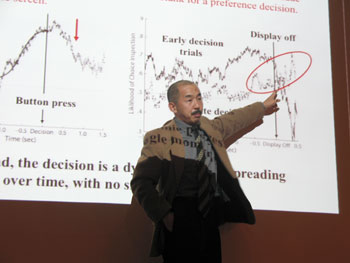 A leading psychophysicist discussed on April 3 at Fordham how the brain subconsciously influences emotional decisions.

“When you choose to buy something in a shop, you don’t know why you choose it,” said Shinsuke Shimojo, Ph.D., professor of biology, computation and neural systems at the California Institute of Technology and director of the NTT Computer Science Laboratory in Japan.

“Of course, if I ask you, you’ll give an immediate reason: ‘I bought red T-shirts because I like red,’ or, ‘I bought this CD because I like the singer’s voice.’ But usually those are post-hoc reasonings,” he said. “The brain pre-determines your choice and then the brain gives you the reason later.”

Shimojo is at the forefront of research on subconscious brain functions that underlie emotional decision making.

A 2003 study conducted by Shimojo found that human subjects who were asked to choose which of two faces was more attractive spent increasingly more time gazing at the face that they eventually chose.

Moreover, when the subjects were shown faces for varying durations, they typically chose ones they had been exposed to for longer periods.

The same phenomenon holds true for choices between abstract geometric figures, according to his results.

“The eyes decide ahead of time,” Shimojo said of what he calls the “gaze cascade effect.”

More than previously thought, people’s preferences may be tied to the interplay between what and how long they see something and their cognitive conception of attractiveness.

This runs counter to what psychophysicists call the “attractiveness template,” which assumes that people’s ideal conceptions of beauty have been imprinted on their brains through early exposures to other faces, such as their mothers’.

Shimojo has found that when images of faces have been altered to eliminate possible biases due to ethnic origins, hairstyles and other characteristics, results still show that someone’s gaze is subconsciously oriented toward the eventual choice.

The study even extends to texture, in which subjects were blindfolded and asked to feel two different textures and choose the one they thought “felt nicer.”

“It’s not a matter of eyes or vision. It’s a matter of attention and orienting,” Shimojo said.

His findings on the “gaze cascade effect” were published in a December 2003 article in the journalNature Neuroscience.

He also discussed his work into how memory influences preference.

In one experiment, study subjects were repeatedly shown pictures of similar faces as well as nature scenes. He found that when someone sees a face again and again, the chance that he or she will like someone who appears similar to that face increases.

With nature scenes, however, people just get sick of them, he said.

“Lots of people will pay a fortune for an apartment or house with a beautiful vista. Don’t do that. You’ll get bored,” Shimojo said, jokingly.

While his research has been lauded worldwide, Shimojo said his work is not done.

“It’s mysterious, and I like to study mystery,” he said. “There are three challenging mysteries in human behavior neuroscience. One is emotion, the other is decision-making and, finally, consciousness. These are the topics in which neuroscience is not doing well. Preference decision making is sitting right in the middle of these areas, and that’s why it’s worth exploring.”

He spoke at the Interdisciplinary Faculty Seminar in Bioinformatics organized by Frank Hsu, Ph.D., Clavius Distinguished Professor of Science for the Department of Computer and Information Science.

“Fordham and the Department of Computer and Information Science was honored to have him visit and give a talk,” Hsu said.

Shimojo’s lecture was sponsored by Fordham College at Rose Hill and the Department of Computer and Information Science, which celebrated its 25th anniversary this year.