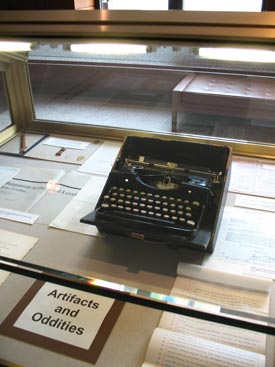 An old royal typewriter is just one of the “artifacts and oddities” on display as part of an exhibition on the centennial of the Fordham University Press.
Photo by Janet Sassi

An exhibition celebrating the 100th anniversary of the Fordham University Press at the William D. Walsh Family Library Exhibit Hall that features books, information on authors and various milestones from the academic press’s century of publishing will run through Dec. 21.

“This unique exhibition is an attempt to portray through objects and artifacts a chronicle of our life at Fordham,” said Robert Oppedisano, director of the Press. “Our ever-more diverse and distinguished [book]list continues to enhance the University’s mission of excellence in teaching, research and service.”

The Press is the nation’s oldest Catholic university press, founded in 1907 by James J. Walsh, M.D., who was dean of Fordham’s School of Medicine. Some of the things on display include a 1937 publication contract with writer Hilaire Belloc, articles from old newspaper archives and some of the publisher’s rarest book covers.

The academic publisher established its reputation in the humanities and social sciences under its first fulltime director, Robert E. Holland, S.J., in the 1930s. It experienced its most dramatic growth in the decades after the 1950s, publishing more than 100 books during that period. Today, the Press publishes approximately 45 titles per year, with annual sales of close to a million dollars.

Its specialties include philosophy, literary studies, religion, and it has developed a niche market in books on the New York metropolitan region, as well as military and transportation history. In February, the Press hosted a daylong conference commemorating its centennial at the Lincoln Center campus that featured some of the authors it has published over the years.