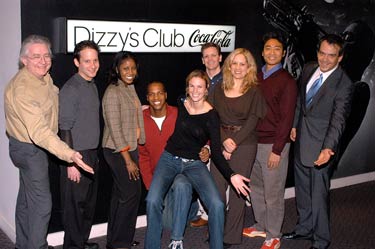 John Hollwitz, Ph.D., (left) and Francis Petit, Ed.D., (right) pose with some of the EMBA students who participated in a jazz-simulation exercise on the first day of class.
Photo by Ken Levinson

The typical student pursuing Fordham’s executive master of business administration (EMBA) degree is a mid- to senior-level executive, about 33 years old, making roughly $150,000. Of all the abilities he or she may possess, “kazoo virtuosity” is probably not one of them.

That didn’t stop EMBA professors from introducing the current crop of students to the program and each other by making them write and perform a jazz composition using—you guessed it—the kazoo.

The jazz simulation exercise was part of a management core course taught by John Hollwitz, Ph.D., professor of management systems at the Graduate School of Business Administration. Hollwitz developed the idea with Francis Petit, Ed.D., assistant dean and director of executive programs, and Eli Yamin, pianist and director of the Middle School Jazz Academy at Jazz at Lincoln Center, as a way to fast track the students’ bonding and teamwork skills.

“We were seeking ways for them to bond in a goal-related environment using job-related tasks rather than in a social environment,” Hollwitz said of the 35-member class that meets one weekend each month for 22 months.

Although the students had an inkling they would be learning something about jazz—the syllabus gave a hint—they were in for a surprise when they reported to the Lincoln Center campus on their first day. Instead of a lecture, Hollwitz charged them with writing, composing and performing jazz in a studio at one of New York City’s famous music venues—Jazz at Lincoln Center.

“Their reaction was, especially for the vocalists, extremely nervous,” Hollwitz said. “One of our students, for instance, when he saw his name on the vocal sheet, said, ‘I can’t do this.’ In the end, we couldn’t get him off the stage. It was really very funny.”

The jazz simulation, which was recognized last fall for its “program innovation” in EMBA Magazine, exceeded its goal. The students divided into groups of about five or six and set to learning how to write, arrange, compose and perform a musical number of their choosing. When the group performances ended two and a half hours later, the students were well beyond introductions.

So how did they deliver full-blown performances in such a short amount of time?

“Here we had workshop leaders floating around the room and people stepping in with different kinds of rules and ideas,” Hollwitz said. “Hitting the wrong notes didn’t matter. Being in tune didn’t matter. People stopped worrying about whether they couldn’t sing. What mattered is that the groups came together.”

When class reconvened at 8:30 a.m. the following day, each student already knew five or six people from the previous night’s event, Hollwitz said.

Jazz made for the perfect simulation because of its improvisational mode, Hollwitz said. For that reason, other EMBA cohorts may also participate in a jazz simulation exercise.

“We do things above and beyond academics from a student perspective,” Petit said. “We do wine tastings, a golf clinic, and the crescendo is a trip to China at the end of the course. I would certainly like to do this next year and, hopefully, improve on it.”