skip to main content
Return to Fordham University
You are at:Home»Inside Fordham»Everette Dennis: Don’t Judge a College Guide by Its Cover 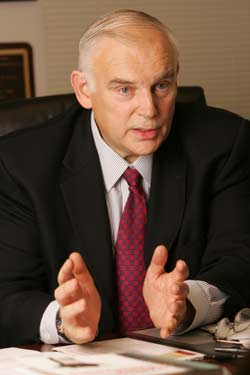 In the cutthroat race to get into the best business schools, young, driven applicants become obsessed with the rankings, certain they’ll only land their dream job if they graduate from one of the top 30 schools.

Media industries professor Everette E. Dennis, Ph.D., has a message for these students: Don’t believe the hype. Business programs often find their way to the top of the rankings based on the reputation of the university, he said, rather than the merits of the program.

Only two percent of applicants can get into the top 30 schools, Dennis said. So, he asked, “Why should 98 percent of people feel disappointed?”

“The world is full of simple-minded guidebooks,” said Dennis, the Felix E. Larkin Professor of Media and Entertainment Industries, director of the Center for Communications and area chair of Communication and Media Management at the Fordham Graduate School of Business.
In the early days of ranking business schools, Dennis said, one university that ranked in the top ten didn’t even have a business program. Conversely, many “B schools” get short shrift.

In his new book, Finding the Best Business School for You: Looking Past the Rankings (Praeger Publishers, 2006), Dennis and Sharon P. Smith, former dean of Fordham’s Graduate School of Business, criticize the business school rankings of Forbes, Business Week, and U.S. News and World Report for their lack of complexity and context. The authors urge prospective students and faculty of MBA programs to think beyond the rankings and embrace some of the nation’s smaller schools, many of which have quality, niche offerings, like Babson College’s entrepreneurship program.

“If you want to be in business in Nebraska,” he said, “you’d be better off going to the University of Nebraska, which is a wonderful school.”

Students should consider long- and short-term goals, Dennis said, factors from school size to what kind of job they’d like to secure after graduation. Those seeking a career in business leadership may do better at one school, while those content to stay in middle management or run their own company may fare well at another.

Dennis’ and Smith’s book helps readers evaluate their reasons for pursuing an MBA, as well as the return on investment, based on financial and social sacrifices. “Is it worth dropping out of life?” Dennis said. “What’s at the other end?”

The book also urges business schools and business faculty to remain competitive by keeping up with changes in the field. Dennis argues that schools are too often plagued by “the tyranny of the rankings,” and refuse to alter their programs for fear of falling lower on the lists.

“You could lose your place in the rankings,” Dennis said. “You can change, but it’s easier not to.” But devoting resources to improving standings, he said, is fighting “last year’s war.”

Dennis and Smith point out that rankings are often influenced by the short-term needs of recruiters and recent graduates, and don’t involve a lot of forward thinking. According to the authors, schools need to think beyond “silos” while still teaching basic business disciplines, but also respond to changes in technology and globalization.

“Business education has not had a major reform in 50 years,” Dennis said. “[But] you wouldn’t build a car in the 1950s and say this is the perfect car forever.”

Dennis has lectured at more than 50 universities worldwide, is the author of numerous books and essays, and the founding president of the American Academy in Berlin, a center for the exchange of cultural ideas between the United States and Germany. He has served as member of the Council on Foreign Relations and authored a series of studies based on interviews with business executives, journalists and government officials in Eastern Europe, Latin America and Asia.

Dennis served as dean and professor at the University of Oregon’s journalism school, and later founded the Media Studies Center at Columbia University — the nation’s first institute for the advanced study of media and technological change.

Programs that offer degrees in business and media, like the one Dennis heads at Fordham, demonstrate the need for forward thinking. Frequent changes in the motion picture industry, radio and television and most significantly, new media, must be reflected in a school’s offerings, Dennis said. “You need to mindful of the generalizations and also the specifics.”

Finding the Best Business School for You also includes practical information on specific schools, student satisfaction and an assessment of the major rankings.

“The rankings are not going to go away,” Dennis said, but “the list of best schools for any individual may vary greatly.”